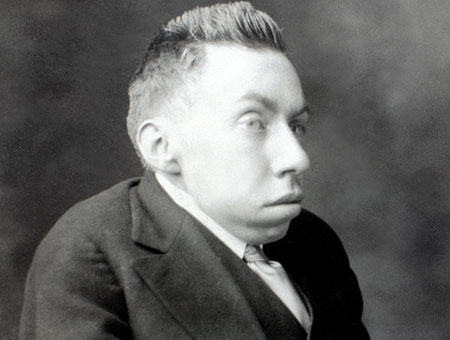 “Not since Thoreau,” wrote Edward Dalhberg, “has any American save RANDOLPH BOURNE (1886-1918) shown such lucid anger against the mummery of the state.” That’s a heavy burden for anyone, let alone a hunchback dwarf born with spinal tuberculosis. A talented student and musician, Bourne earned money recording piano rolls and attended Columbia University, where he he studied with philosopher John Dewey, whose pragmatism Bourne would outgrow as an “impossibilist” and one of the great eassayists — for The Seven Arts and The New Republic, among others — of the 1910s. As a radical literary critic, Bourne was impressive — his “The Art of Thedore Dreiser” remains a touchstone, as does John Dos Passos’ Bourne eulogy in his novel 1919. But Bourne is more commonly thought of as a political and moral writer. His autobiographical “The Philosophy of Handicap” is rightfully included The Best American Essays of The Century, while pieces like “The Trans-National American” (on the perils of assimilation, compared to a richer and more logical multi-culturism) and the prophetic military-industrial summation, “War Is The Health Of The State,” remain contemporary. Because he died so young — of the Spanish flu a month after Armistice Day — Bourne’s legacy is somewhat muddled, claimed by a panoply of leftists and libertarians, all of whom wonder how their hero would have faced war’s end, with its communists, socialists, anarchists and a state which didn’t much care to distinguish between them. Most inspiring: poet Kenneth Rexroth’s pacifist reading group, “The Randolph Bourne Council.”

READ MORE about the Modernist Generation.