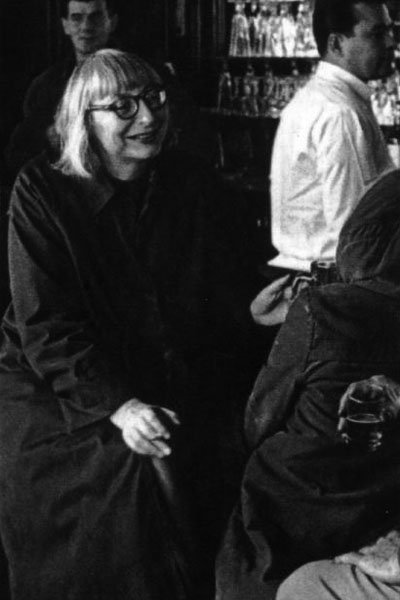 More dogmatically rebellious than many of her more famous contemporaries of the New York literary scene, JANE JACOBS (1916–2006) defies tidy posthumous characterization as much as she rejected it in interviews during her lifetime. In her 1961 masterpiece The Death and Life of Great American Cities, Jacobs attacked the titans of city planning during the apogee of public funding for sweeping urban renewal programs (not just in print, also in open meetings, in the streets, anywhere she could): “The trouble with paternalists is that they want to make impossibly profound changes, and they choose impossibly superficial means for doing so.” Bang! down goes le Corbusier; Pow! a right hook to Robert Moses; Oof! body blow to soi-disant mentor Lewis Mumford. All this from a high-school graduate, a typist turned city journalist. Jacobs made herself into an urban anthropologist, marshaling a deep knowledge of the social patterns and economic webs that underlie New York to attack the abstractions of urban theorists. Her call to arms was for more inductive reasoning and less deductive — only with an empirical knowledge of the ecology of cities will we be able to fight the Great Blight of Dullness. She has been embraced by both the left and the right, though not easily; she hated government when it acted stupidly, but recognized its importance in fostering healthy urban development; she encouraged the flourishing of business, but was against monopolization or “monoculture.” Her influence is seen everywhere in recent decades through the projects of her spiritual followers, the New Urbanists, but it’s hard to find the gritty vibrancy of Jacobs’ Hudson Street in New-Urbanist projects like Disney’s Celebration, Florida. Jacobs believed that her later works on economic theory would be her legacy, but it is her love of and respect for the complexity of city life that will endure.