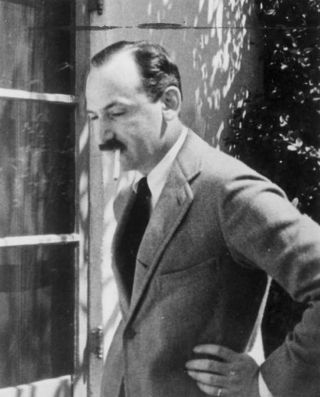 As a child, NATHANAEL WEST (Nathan Weinstein, 1903–40) trained his bull terrier to attack anybody who disturbed his reading. He faked his transcripts to get into Tufts and was quickly bounced; undeterred, he stole the transcripts of a student with the same name and got into Brown. There, he disowned his Jewish background and became a Brooks Brothers dandy and aesthete; upon graduation, he snuck off to France for a couple years. After the Crash wiped out his family’s fortune, he became the night manager of a hotel where he allowed fellow writers — including Dashiell Hammett, who wrote The Maltese Falcon there — to stay rent-free. S.J. Perelman married his sister; William Carlos Williams, Erskine Caldwell, and F. Scott Fitzgerald were his friends. Shortly after marrying Eileen McKenney (subject of the memoir My Sister Eileen, which became the musical Wonderful Town), West killed her and himself in a car accident. Even if he’d only written a racing column, West would be one of my favorite 20th-century characters.

As it happens, West is my favorite American writer of the Thirties — the great striker of sentences between Joyce and Nabokov. There is nobody until Flannery O’Connor who wields black comedy to such serious, ethical purpose. Though he’s best known for his deft dissection of Hollywood, The Day of the Locust, his masterpiece is Miss Lonelyhearts: a slim, perfect, ugly-beautiful book that cannot laugh at human suffering, but cannot fail to see the joke.

On his or her birthday, HiLobrow irregularly pays tribute to one of our high-, low-, no-, or hilobrow heroes. Also born this date: Evel Knievel, Georg Büchner.