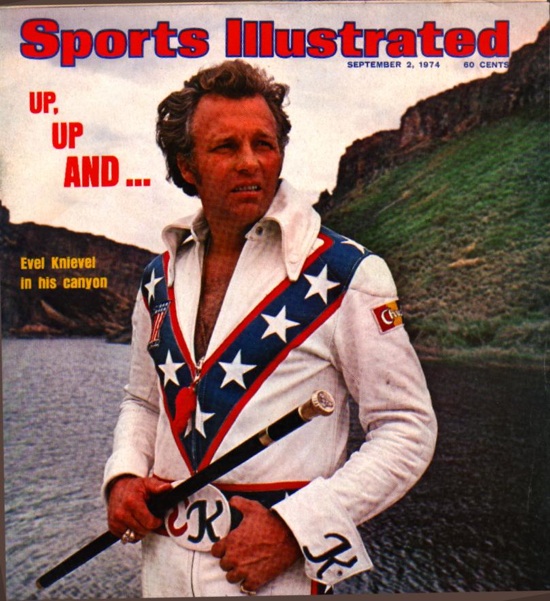 Star-spangled motorcycle daredevil EVEL KNIEVEL (1938 –2007) showed the world you can be fearless and self-destructive and — if you understand hype — become an American icon. He stole his first bike. He jumped a crate of rattlesnakes, fourteen buses, fifty stacked cars, broke thirty-eight bones. He jumped the fountains at Caesar’s Palace, crash-landing into a 30-day coma. His most spectacular miss was halfway across Snake River Canyon in a rocket-powered Skycycle. He was in a brawl that sent fifteen Hells Angels to the hospital. He lost one liver and got a new one from a boy who died in a motorcycle crash. His FBI file is 290 pages long. He was baptized at 68 years old and had a pump implanted in his belly to shoot morphine into his back 24/7. His antics spawned $300 million worth of Evel Knievel toys, a Simpsons parody, a roller-coaster ride, and ten grandchildren. He inspired future daredevils, from David “Impact Addict” Leslie to Jackass to thousands of backyard wannabes. The facts of his life vary in the telling — but the truest thing ever said about Knievel? He said it himself: “If the world had more people like me, it would be a more interesting place.”

On his or her birthday, HiLobrow irregularly pays tribute to one of our high-, low-, no-, or hilobrow heroes. Also born this date: | George Buchner | Eminem |