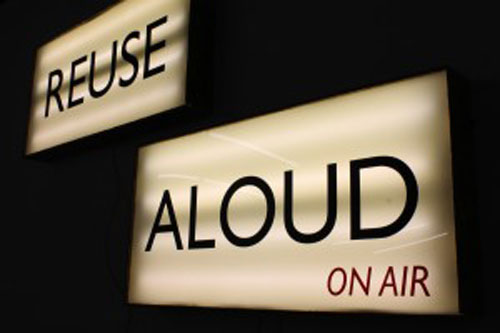 Scavenging isn’t just for surfaces. It’s a form of misremembering, of scraping something out of its accumulated and often forgotten context, and releasing it anew into the world. But misremembering is also a kind of creativity; when aspects and areas are recombined and reused, there can be enough of the old to strike a familiar chord, and enough of the new to thwart it. This mnemonic dissonance may be described as uncanny, and it applies as much to sound as to sight; perhaps more.

There’s plenty of treasure to be scavenged from the airwaves. But it’s not just treasure; it’s material, ripe for recombination. ReUse Aloud, a collaboration between curators Will Strong and Rosanna Skett, and Tyneside Cinema’s Pixel Palace, cap their month-long virtual occupancy of radio station basic.fm with a 24-hour remix marathon, featuring their provocative, listenable take on hits, misses, mixes, and mashups.

While appropriation within the arts existed previously, open source culture has accelerated the attainment and re-distribution of material. Data can easily be obtained from the online cache, re-appropriated and re-dispersed as new. We are part of the remix generation.

Chopped and changed, re-arranged and re-branded, collected and disseminated; the very essence of originality is being tested. Within this borderless exchange of data and ideas, artists choose to practice; gathering original sources and sowing the seed ‘remixed’. There is the potential to reach a wide audience quickly and work can be made cheaply or for free. Reuse Aloud questions; is work derived from a pre-existing, original source able to be unique on its own terms? Furthermore, when re-appropriating and publishing, can the titles ‘author’ and ‘owner’ apply?

Should you be in the (North) (East) (England) area you can drop in for a more sculptural take on the performance proceedings. In cyberspace, just tune in to basic.fm/radio, where you can listen live online.