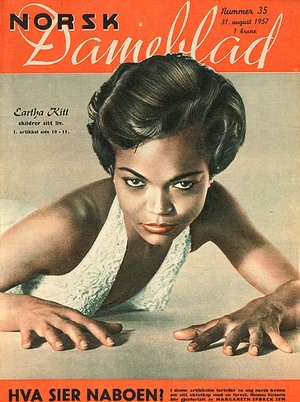 “I had enough ambition within myself to try to create a better world — in spite of the depressions and suppressions, and I had my share,” Eartha Kitt (1927–2008) told a reporter in 1956 upon the publication of the first of her three autobiographies. A mere decade into a singing-dancing-acting career that eventually spanned almost sixty years, Kitt had by then survived a childhood in which she was abandoned by her South Carolina family (because of her pale skin) and sent to New York to live with an abusive aunt who turned out to be her mother. The teenaged Kitt escaped to Europe with the Katherine Dunham Dance Company; before long, she was singing sassy songs in Parisian cabarets and Orson Welles called her “the most exciting woman alive.” Broadway and the movies followed — and in 1967, thanks to her feline grace and seductively purring voice she stepped into Catwoman’s stiletto boots on the Batman TV show.

The following year, however, Kitt’s career came to a crashing halt when she rose to her feet at a White House luncheon and told a horrified Lady Bird Johnson: “You send the best of this country off to be shot and maimed… They don’t want to go to school because they’re going to be snatched… from their mothers to be shot in Vietnam.” Responding to the Secret Service’s request for a report on Kitt’s activities dating back to 1956, the CIA reported — for example — that, along with “a number of persons identified in the past with the Communist party,” Kitt had once signed a newspaper ad in favor of Martin Luther King Jr. She couldn’t find work in the US again until 1978, when President Carter invited her to the White House and told her, “I’m glad to have you back.”

On his or her birthday, HiLobrow irregularly pays tribute to one of our high-, low-, no-, or hilobrow heroes. Also born this date: Annie Nocenti and Ari Up.