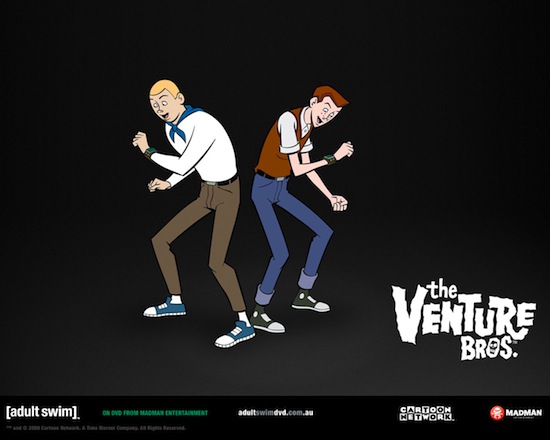 The only person who cares whether Anne Frank could beat Lizzie Borden in a fistfight is comic book/TV writer, storyboard artist, and voiceover actor JACKSON PUBLICK (Christopher McCulloch, born 1971). Working alongside fellow polymath Doc Hammer, Publick has created Adult Swim’s The Venture Bros., a hilarious homage to 1970s-80s kids’ entertainment. Other Adult Swim shows venerate pop culture; Publick lovingly deconstructs it, and in the process of doing so examines the melancholy soul of modern man. He has created a world populated solely by extraordinary characters, not one of whom lives up to his or her potential. Anticipating Paul Krugman, who lamented in a 2010 Times op-ed that “We are no longer the nation that used to amaze the world with its visionary projects,” the central theme of Publick’s work is failure — not just of individuals, but of an entire culture. Though its visual style harks back to a time of boundless space-age optimism, every aging building, vehicle, and institution in The Venture Bros. seems on the verge of collapse. With The Venture Bros., Publick has co-created the first heroes of and for the post-recession generation.

On his or her birthday, HiLobrow irregularly pays tribute to one of our high-, low-, no-, or hilobrow heroes. Also born this date: Margaret Sanger and Ben Cohen.