Erik Davis, author of Techgnosis, Nomad Codes, [Led Zeppelin IV], and Visionary State, is a friend of HiLobrow. He is also a contributor: His 2010 “Pop Arcana” column for us on the Cute Cthulhu meme remains one of our most popular posts. We’re thrilled to publish ten of Davis’s essays which first appeared elsewhere; this is the sixth installment in the Nomadbrow series.

***
Chasing the Tengu
The Mystic Undertow of Vinyl Toys

This piece appeared on my now moribund blog in 2006

I have the great good fortune to live near Kidrobot, a cozy vinyl toy boutique in the Haight-Ashbury. A few years ago, I wrote one of the first overground pieces about the vinyl toy subculture, which began in the 1990s when Hong Kong fabulists like Michael Lau and Eric So decided to apply their figure-making fu to their fantasies about American street culture. Japan, with its own delirious toy culture firmly flaming, soon got into the act, as well as lots of Westerners — from old-school hands like Futura to Super Furry Animals artist-in-residence Pete Fowler. Now urban vinyl figures are global tokens in a cross-culture game of pop fetishism that would make Andy Warhol (and probably Vaughn Bode) proud. 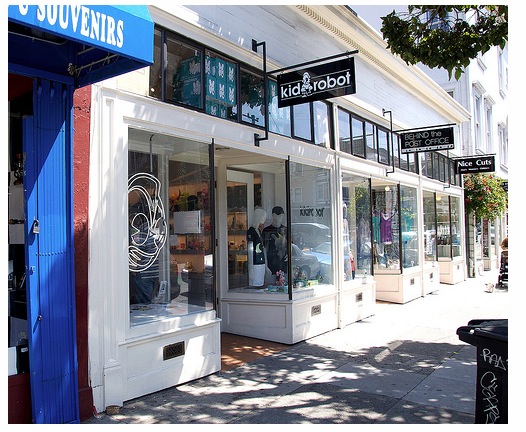 I’ve picked up a few of these things over the years, but I do not collect them. With Kidrobot serving as a neighborhood museum, I don’t need to. Popping into the shop, I can enjoy the constant fluctuations of fashion and fun, the “bad infinity” of pop novelty, without cracking open my wallet. Resisting the desire to own the coolest toys is, for me, part of the pleasure, because this resistance sustains the circuits of virtual desire that enchant the thing in the first place. After all, these are objects whose seductive power lies principally in the incorporeal world of the graphic image, and such things cannot be “possessed” the same way you own the junk in your basement. Products of a (usually digital) design process, vinyl toys invoke the cartoon continuum of anime more than the material legacy of Barbie or GI Joes, and they are largely hawked and traded through the screens of the Internet. Only when you finally acquire them do these tantalizing graphic beings “come to life” as actual objects — ie, as motionless, environmentally suspect chunks of plastic crowding your already messy desk. But there is usually something inherently boring and banal about them at this point. In fact, many collectors never take the figures out of their boxes — not just to preserve their value, I suspect, but to sustain the unrealized promise of quasi-animated presence. 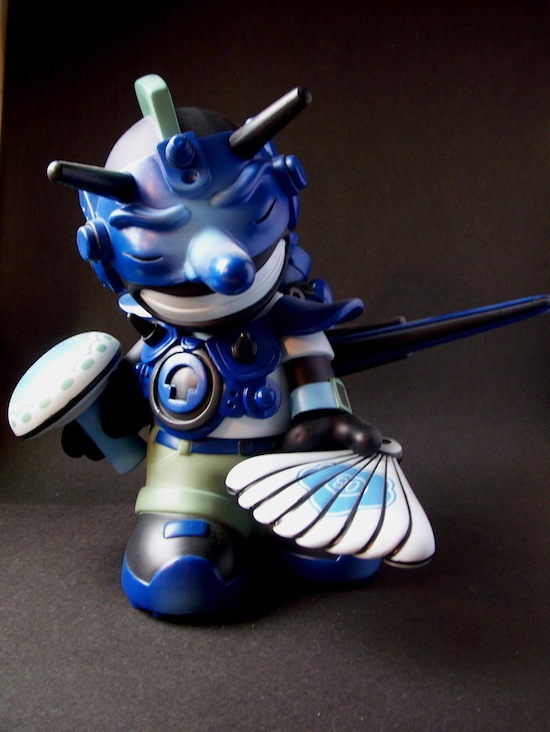 On occasion however, resistance is futile. Earlier this year, I could not buck the siren call of Tengu, the creature you see above. Tengu is the artist Damon Soule’s mutant twist of the Kidrobot mascot, which was originally designed by a creative young fellow named Tristan Eaton. I was drawn to the figure’s distinctly Pacific Rim fusion of cute and sinister, to the mushroom iconography, and to the obscene mask that I took to be a swollen reference to Stanley Kubrick’s A Clockwork Orange, that now ancient source-text of visionary anomie. With its Japonisme both celebrated and concealed, Tengu seemed to concretize the hybrid fusion culture that now circulates between east and west. Without being obviously “dark,” like some gothic or slutty vinyl figures, Soule’s piece seemed more soulful and substantial than the usual fare, a chthonic robo-gnome with more than a hint of blasphemy and spectral power. I had to buy one for my friend N___, a twisted teddy bear of a fellow, who adored the thing. But then I had to snag one for me as well. And now he takes up the pride of place in the slacker shrine that sits on top of my fridge, where he lords over a gathering of psychedelic idols, travel detritus, and sacred profanities. 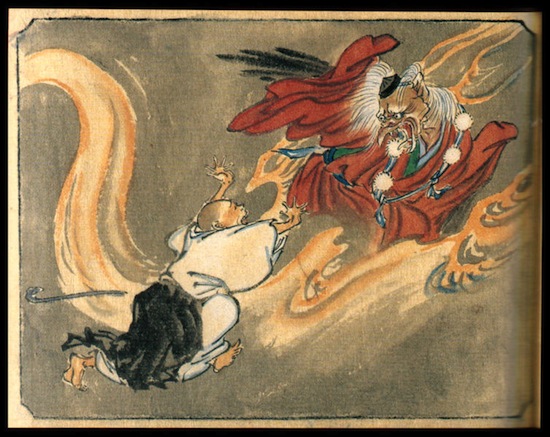 One late and loopy night, N___ and I chased the Tengu down Google’s rabbit hole. For once, the hyperlinks deepened our experience rather than just deferring it, and we discovered just how far a chunk of global popware can lead you into the dark heart of the Mystery. Right off the bat, we learned that the tengu is the Mr. Punch of Japan’s supernatural pantheon, an impish demon of the mountains usually described in English texts as a “goblin” (itself a marvelous and ancient term; the 14th century Wyclif bible contains this spooky verse: “Of an arowe fliynge in the dai, of a gobelyn goynge in derknessis.”) The original tengu were malevolent crow-beaked shape-shifters who liked to raise havoc, tempt priests, abduct children, and stir up war. Probably derived from Chinese mountain lore, and then fused in Japan’s Buddhist climate with the Indian figure of Garuda, the tengu later became intimately associated with isolated mountain priests known as yamabushi. These dharmic hermits practiced esoteric tantric Buddhism and, later, served the role of herb-wielding witch-doctors for the local peasants — a development that is usually described as a degeneration of their religious practice, but that may have reflected the deepening embrace of the forest’s shamanic undertow. 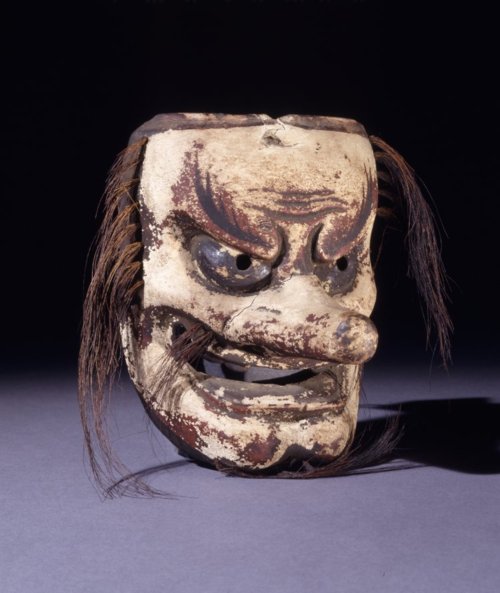 Far from being a cyborg fantasy, Damon Soule’s Kidrobot toy is therefore a deeply old-school figure. The mask and fan are totally traditional, and even the jetpack wings recall the supernatural flights of the feathered tengu. But what about the mushroom? The Kidrobot Tengu is not only clutching a juicy fungi, but has a mushroom emblazoned on his chest armor — a fungal twist on the stylized flora that often served as clan totems in medieval Japan. N____ and I kept digging for connections but found none, partly because N____ kept directing the search to more tengu porn, convinced that we hadn’t yet gotten to the bottom of the issue. 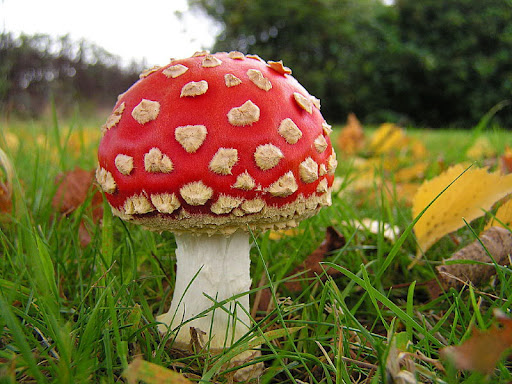 Then we mentioned the mushroom to E____, who is most wise in psychoactive lore, and he plucked from his voluminous brain the fact that in Japan a certain mushroom species is known as tengutake. But not just any mushroom. This “goblin mushroom” is none other than the notorious fly agaric, the Santa Claus-topped hallucinogen gobbled by Siberian shamans and responsible — according to some but by no means all psychedelic historians — for ancient Indo-European door-cleansers like soma, hoama and the brews of Eleusis. And if you buy Clark Heinrich’s art history lessons, nearly every religious mystic in the Western tradition has munched on these noxious fungi. Taken by only the most intrepid psychonauts today, the fly agaric nonetheless stands (or fruits) as perhaps the most enigmatic signifier of ancient psychedelic wisdom in nature’s pharmacopia.

N____ and I found little speculation about the psychedelic dimension of the tengu myth, despite the connection between the goblins and the yamabushi, the herbalist mountain shamans who were in the position to know something about the effects of red-capped Amanitas. The tengutake connection does, however, help illuminate one particular fragment of the lore. Like faeries or ETs, the tengu were sometimes believed to kidnap human beings, and especially kids. After being released, these abductees often returned to civilization in a state of dementia known as Tengu kakushi. Hmmm.

Damon Soule, a graffiti writer and visionary artist now living in the lower East Side, first discovered the tengu on a trip to Japan, and he knew something about the Amanita connection when he desiged his piece for Kidrobot. Given that “it seems to fit with the character’s behavior quite well,” Soule was happy to slip the psychoactive referencea in. Elements of the tengu appear throughout Soule’s work, especially the long noses that grace many of his robot dudes. For Soule, a mythology nut, the tengu resonates with other long-nosed trickster figures in world myth. It taught him “how interconnected all ideas are, even when they aren’t so obvious.” Like all tricksters and travelers, the tengu marks a world of ruptures and transitions — a perfect mascot for a planet where even a chunk of global pop detritus can carry an ancient and uncanny trace of shamanic encounter.