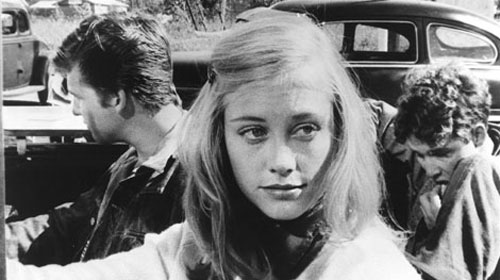 The Last Picture Show presents the enigma of the old western wrapped in the mystery of the new. Set in the early 1960s in a small, windswept Texas town, it’s the kind of place that springs up on the way from somewhere to somewhere else.

Two high school seniors, Sonny and Duane, (Timothy Bottoms and Jeff Bridges) are co-captains of a football team so monumentally inept that at one point they manage to lose 121 – 14. The future they face seems as bleak as the empty streets in the town and the endless flat plains of the surrounding land. They sense it as they stumble through the paces of late adolescence: girlfriends, jobs, uncertainty.   You don’t know them deeply, but you know them as well as they know themselves. And that may be enough.

The film was adapted for the screen by Larry McMurtry from his loosely autobiographical novel of the same name. Throughout his long career McMurtry has both memorialized and demystified the west, and the western (including Lonesome Dove, which won the Pulitzer Prize and was made into a TV miniseries, and Brokeback Mountain, for which he co-adapted the screenplay), wrestling with what he sees as its central question: do we — can we — make any difference in all this space?

This is the challenge posed by the west to the western-as-genre. It is not nature seen as Ruskin’s sublime, or tamed into gardens, or courted at its edges by cities and ports. The great Yellowstone post-volcanic caldera is clearly not cultivated with human interests in mind. And despite our continuing attempts at such cultivation; the west has implacably insisted on its scale, its silence, and its terms.

The film keeps a respectful distance from its characters while doing a close reading of the landscape. But how can one do a close reading of emptiness? One way is to look closer. What seems empty has been significantly altered by its human inhabitants: the trees, as one character points out, were not there when he was young, they have been planted since. And the pond where they fish had not been a pond, before people arrived who felt like fishing. We carve out little habitats in space to suit us.

If she was here, I’d probably be just as crazy now as I was then in about five minutes. Ain’t that ridiculous? Naw, it ain’t really. ‘Cause bein’ crazy ’bout a woman like her’s always the right thing to do.

As you watch you realize that the entire place has been imagined into being by films.

America defined itself by identification and confrontation with the west — its size, its inhabitants, its demands and its freedoms. The western got its start as a literary and theatrical genre almost the minute that the actual frontier closed — the fences were still down in the landscape of ideas. In films, the western turned hardscrabble Civil War veterans into icons, and invited suburban WWII vets to imagine that they too were larger than life despite the end of the battlefield. Any lingering feelings of insignificance were both justified and mollified by the oversized vistas, as man could not hope to be heard by distant rocks, themselves marked only by the passage of geologic time.

The echoes of Bresson and Godard here are not accidental. Faced with the impersonality of the natural landscape, existentialism seems an almost natural response. How do we fit into this immensity? What are we doing here? And yet, existentialism is not the right response, exactly; it is too interior, and also, oddly, too bleak. This landscape has not been tamed, but it has been modified, and it may not require huge amounts of introspection to do something about it. 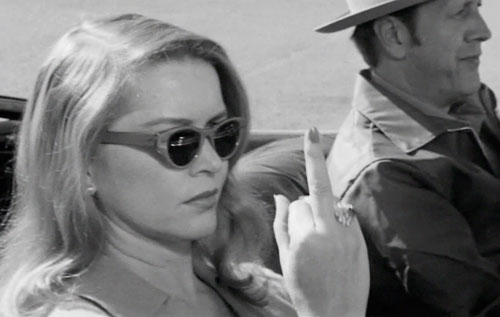 The literal last picture show in the film is an ‘old’ western, a showing of Red River, the John Wayne classic dramatizing one of the first cattle drives and the beginning of the free-range cowboy. But the final few frames of Red River are themselves framed by the run-down theater, and when the lights come up you can see all the empty seats.

The new western is not cowboys fighting with Indians, or each other. The new western is a confrontation with emptiness, and the challenge to make something up to fill it, something that rises to its measure. The American response to just showing up without a script is to improvise. As Lois (Ellen Burstyn), the femme fatale mother of the high school’s femme fatale puts it,

I guess if it wasn’t for Sam, I’d just about have missed it, whatever it is. I’d have been one of them Amity types that thinks that playin’ bridge is about the best thing that life has to offer.

Pragmatism, not existentialism, is the result of an uniquely American confrontation between individual and social desires — desire in general — and a landscape so unmistakably made for itself. 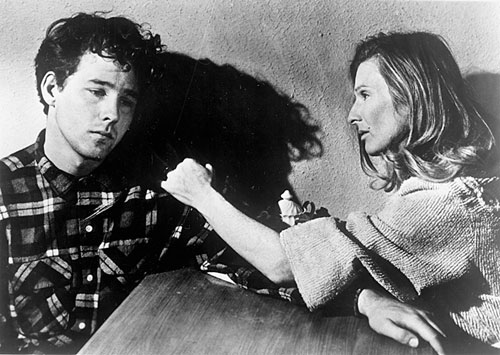 ***
A version of this essay appeared on the Brattle Theater Film Blog, June 2009.