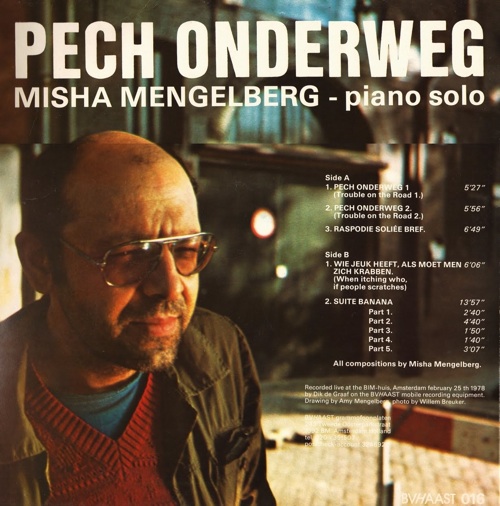 In 1974, MISHA MENGELBERG (born 1935) issued an LP that paired a 1964 recording of the Dutch pianist and several countrymen backing Eric Dolphy on Bird’s “Epistrophy” with a two-minute improvised duet between Mengelberg and his pet red-tail parrot Eeko. That release sums up the two “sides” of Mengelberg’s musical personality. On one, he’s a lover and student of American jazz (with special affinities for Monk and his undersung contemporary Herbie Nichols); on the other, a Cage- and Fluxus-influenced conceptual japer who approaches “free” music-making strategically rather than mystically. (Or, as he once said, “I use all my skills to make situations as chaotic as possible.”) For the son and nephew of orchestral conductors, these directions have been ways of wriggling out from under European classical tradition — but for many avant-gardists, his example has also marked a path beyond “non-idiomatic improvisation,” with its ascetic erasure of jazz harmony or swing. While best known for his duos with combative drummer Han Bennink, a musical frenemy since that 47-year-old Dolphy date, and as nominal leader of the cosmopolitan Instant Composers Pool, those new to his work might ease in by way of Who’s Bridge and Senne Song Sang (both on Tzadik), all-original trio sessions full of economical harmonic explorations and sly rhythmic displacements that give the lie to Mengelberg’s own characteristically diffident claim: “I’m nothing as a pianist.”

On his or her birthday, HiLobrow irregularly pays tribute to one of our high-, low-, no-, or hilobrow heroes. Also born this date: Aesop Rock and Pancho Villa.