Few today understand that the discipline most important to unraveling the central mystery of biology was not biological; likewise, few know that the data crucial to that discovery, which revealed the structure of the DNA molecule, were gathered and interpreted by a woman systematically discriminated against by the academic community. ROSALIND FRANKLIN (1920-58) deserves a place in the pantheon of twentieth century science as assured as that of Watson and Crick, of Hawking and Feynman, of Leakey and Goodall. Born to an elite family — her great uncle was the first Jew to serve in the British cabinet — Franklin was not awarded an undergraduate degree, as women were not eligible for them at Cambridge when she passed her Newnham College finals (the university later awarded her a Ph.D.). James Watson and Francis Crick would receive the lion’s share of the credit for DNA’s discovery; but the data, calculations, and contentions of many scientists were involved, and Rosalind Franklin was as accomplished and daunting as any of her peers. She fought ardently for her theories — not all of which were correct. But it was one of her hard-won images — shared surreptitiously by a rival — which put Watson and Crick on the path to describing the structure of the molecule in full. She was 32 when the struggle over DNA took place; at 37 she was dead, a victim of ovarian cancer that may have been exacerbated by her work with radiation. If the scourge of cancer is one day eradicated, it will be in part thanks to the images Rosalind Franklin extracted from the heart of the helix. 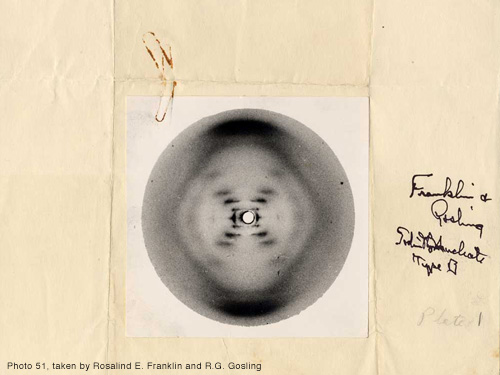 Franklin’s “Photo 51,” which allowed Watson and Crick to discern
the helical structure of the DNA molecule.