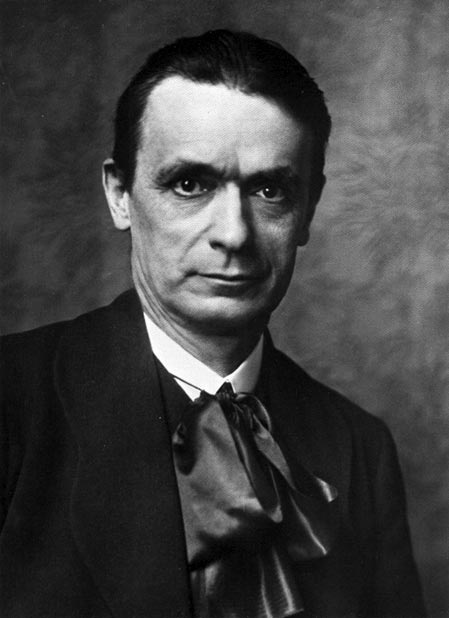 Unlike most of the Austro-Hungarian wanderers who shaped the culture of the twentieth century, RUDOLF STEINER (1861–1925) was less a product of the cafes and opera houses of Vienna’s Ringstrasse than of the herb meadows and far-flung railway stations of the Empire. Editorial work on Fichte and Schopenhauer seemed to promise a career of quiet academic rigor. But a visit to the catatonic Frederic Nietzsche while organizing the philosopher’s archive suggested a different path: to Steiner, the sight of the afflicted philosopher was incandescent and moving. Subsequently, he would combine the ecumenical esoterica of Blavatsky and Krishnamurti with the glittering generalities of European Transcendentalism in the movement of Anthroposophy. Along the way, he attempted the re-enchantment of every aspect of modern life. His “spiritual science” sought an uneasy parity between clairvoyance and empiricism. In Eurhythmy, he offered to remake the arts by combining modal music, interpretive dance, and structural linguistics. His system of food production, biodynamic agriculture, might be described as the union of organic farming and the Götterdämmerung. Such contradictions and fey recombinations light every aspect of Steiner’s story. A Dreyfusard, he criticized the Zionist cause; a half-Jewish intellectual loathed by Hitler, he hymned the richness of Germanic culture; he exhorted his followers to practice both skepticism and credulity, the rigor of reason and the leap of faith. The contradictions are soothed in what remains his greatest legacy, the Waldorf Schools, where children of the bohemian bourgeois work with wood and fabric, grow vegetables, and recite the fairy tales of Goethe.
***