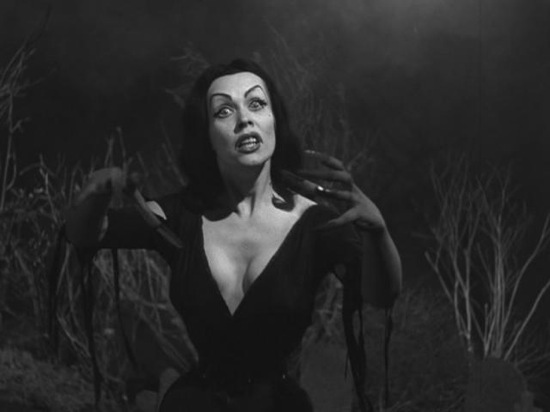 Finnish-born MAILA NURMI (1921-2008) kicked around Hollywood as a hatcheck girl and pinup model before a turn as the Charles Addams cartoon character later named Morticia changed the course of her life, not to mention television history. After her costume won the top prize at a 1953 Halloween masquerade, she was offered the chance to host KABC-TV’s weekly midnight horror movie broadcast — and Vampira, the “glamour ghoul,” was born. Dressed in skintight black, the better to show off her seemingly impossible 38-17-36 figure, Nurmi punned her way through her show Saturday nights beginning in May ’54. The “gorgeously macabre dish that slays ’em in the aisles late at night” was an instant hit. Vampira celebrated “the 700th anniversary of the Black Plague with a little intimate fret together,” reported the Los Angeles Times. “She was to sing ‘If I’d Known You Were Coming I’d Have Baked a Snake.’” Vampira’s show was canceled in 1955, but her role in Ed Wood’s Plan 9 From Outer Space (credited as Vampira) — helped make Nurmi a cult figure whose fame will live forever.