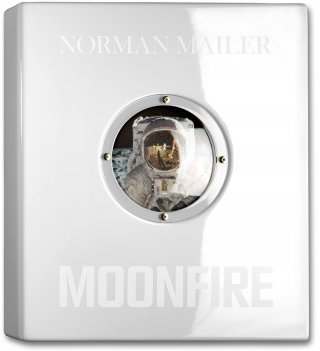 I can’t decide whether this is evidence of the book’s staying power, or a sign that its end is near: to commemorate the fortieth anniversary of the first lunar landing, the art publisher Taschen has released Moonfire: the Epic Journey of Apollo 11, a book of photographs from the mission with excerpts from Norman Mailer’s 1970 book Of a Fire on the Moon. Taschen is releasing an edition of 1969 copies, most of which will carry the retail price of one thousand dollars. Twelve copies, however, have been bound with a fragment of a lunar meteorite. Priced individually according to the size of the sample, the rock-bound editions will likely trump Taschen’s previous most-expensive book, the Muhammad Ali tribute volume GOAT, copies of which went for five grand apiece.

A friend suggested that Goodnight Moon might make a more charming setting for a lunar-rock binding. But Of a Fire on the Moon has a suitably luxurious pedigree; when Mailer sold the book to Little, Brown, he nabbed a then-astronomical million-dollar advance (unlike the moon, we’ve been back to that figure a few times since). And Mailer ends his book with a lyrical passage about a sample of lunar rock brought down to Earth by the astronauts:

Was she very old, three billion years or more? Yet she was young, she had just been transported here, and there was something young about her… (I) wondered if her craters were the scars of a war which had once allowed the earth to come together in the gathered shatterings of a mighty moon.

It’s important to note that Moonfire isn’t bound with rocks brought back by astronauts, which are essentially priceless (photographs featured in the pricey tome, by contrast, were taken during the Apollo missions, and thus are NASA images in the public domain). The Taschen rocks are slivers milled from a lunar meteorite, a chunk of rock broken away from the moon by meteor impact, which fell to Earth as a falling star long ago.

The supreme irony, of course, is that the moon was born of the Earth. A cataclysmic meteor strike more than three billion years ago likely cleaved away a great portion of the young planet’s crust, which formed into the moon through the long ages of its orbit. Since they missed out on the whole “life” business, they have much to tell us about the early history of our planet. But essentially, lunar rocks are only Earth rocks by another name; however astronomical their price on the market, they have only come home.

I haven’t been able to learn whether any of the twelve rockbound copies of Moonfire have been sold, and if so what prices they have fetched. But there is a glimpse here of a strange future for the book: bespoke volumes bound in precious or impossible-to-source materials, rarefied editions priced for space tourists. But of course, that’s how the book started out; much of its latter-day glamor is a survival of the great medieval codices, sumptuous and bejeweled. Like the moon rocks, perhaps the book is destined to go full circle.