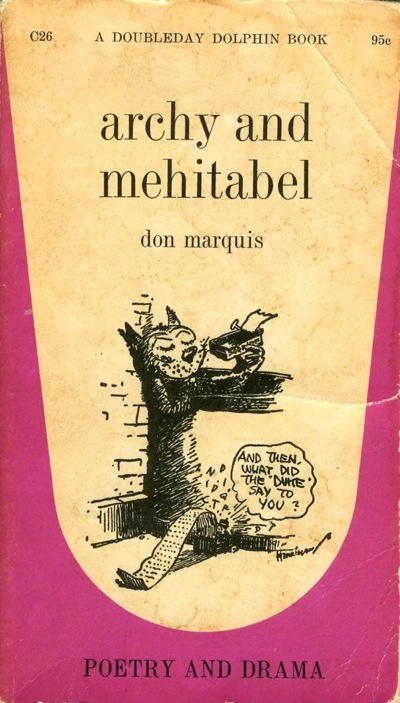 Novelist, poet, and newspaper man DON MARQUIS (1878-1937) was once a household name. Now he is mostly remembered for his Archy and Mehitabel story-poems. Because they are about creatures (a cockroach and an alley cat, respectively), and because they were illustrated — jazzily, tenderly — by the great George Herriman, they are sometimes taken for children’s literature. And they accidentally are. What better metaphor for the locked-in syndrome of childhood than a vers libre poet whose soul has transmigrated into the body of a bug? The lustful, dreaming business of childhood, like that of Marquis’ creatures, takes place beneath the notice of the busy world. Consider Archy on the moth-candle problem:

These subversive, achingly lovely poems are suffused with the ink-stained vernacular and weary, disillusioned glamour of the first decades of the last century. Also, they are eternal. Give them to a child.

On his or her birthday, HiLobrow irregularly pays tribute to one of our high-, low-, no-, or hilobrow heroes. Also born this date: | DangerMouse | Theda Bara | Jean Baudrillard |