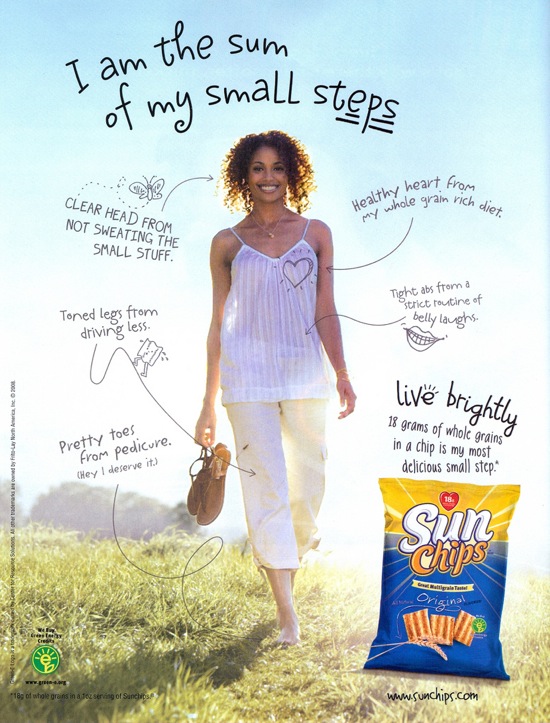 “I am the sum of my small steps,” announce the handwritten-style notes in an advertisement torn from a recent issue of Oprah Magazine. Ecce Middlebrow’s ideal American woman, forever in pursuit of a clear (un-anxious, that is, not lucid) head, healthy heart, toned legs, tight abs, and pretty toes.

Taking these steps, according to Sun Chips’s groovy avatar, permits you to “live brightly” — as good a euphemism as any for what HILOBROW recognizes as the contemporary middlebrow version of enlightenment. But don’t call it that — doing so reminds us of Kant’s demanding definition: “man’s emergence from his self-imposed immaturity.” Instead, call this contemporary state of mens inanis in corpore lentesco “upliftment” — or perhaps “enlightening,” an awkward but unthreatening adjectival noun favored by Oprah and her spiritual teacher, motivational speaker Eckhart Tolle. Ugh.

Enlightening [middlebrow enlightenment] is attained not in a flash, but step by step; you’ve attained it when you’re having fun, eating right, de-cluttering, doing yoga, taking walks, achieving orgasm, filing-not-piling, and maintaining your sense of self-esteem (“I deserve it,” e.g., a pedicure). Oh, and make sure not to sweat the small stuff — like your job, family, community, or environment — sorry, but “going green” barely counts.

Thus writes Middlebrow’s moving finger, in “funky” handwriting — and in a sassy, sisterly first-person singular. (NB: Sarah Jessica Parker’s enduring appeal can only be explained by her mastery of the spoken form of this mode.) Keep your eyes peeled, and you’ll notice Middlebrow’s sentimental lettering everywhere. Like, for example, in this ad for Turning Leaf wine, spotted in the current issue of Real Simple. 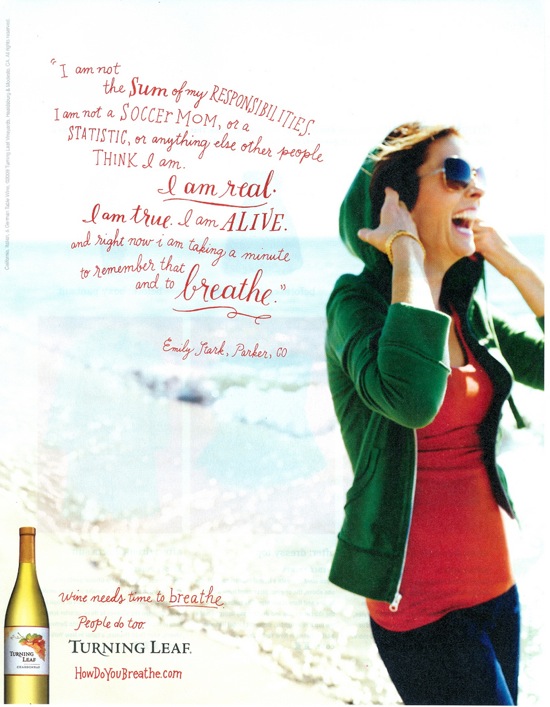 Here we discover the inverse of enlightening. If middlebrow enlightenment apes highbrow enlightenment (it’s progressive, cumulative, attained through effort and willpower — though perhaps not of the variety demanded by Kant), then the middlebrow ecstatic apes romanticism. The middlebrow ecstatic counsels “taking a minute,” demanding some You-Time in which to shed the burdensome construct of your adulthood. Sun Chips Woman may be the sum of her small steps; but Turning Leaf Woman is not the sum of her responsibilities.

Which is not to suggest that Sun Chips Woman and Turning Leaf Woman are actually different; in fact, they are exactly the same. The former never really gets a grip on herself, never emerges from her self-imposed immaturity; her version of striving and effort are thoroughly infused with what Nietzsche called “letting yourself drop.” (Self-esteem is the dialectical synthesis — a middlebrow operation — of effort and letting yourself drop.) The latter, meanwhile, never really cuts loose, never risks existential vertigo by peering into the void.

Enlightenment is highbrow. Ecstasy is lowbrow. The hilobrow doesn’t want to synthesize these modes; she doesn’t want anything to do with lukewarm, feel-good enlightening or middlebrow ecstatic. Instead, she wants the impossible: enlightenment and ecstasy, sincerity and authenticity, simultaneously. Because you’re worth it, ladies.

This is the fourth in a series of posts reviving the ancient practice of extispicy — i.e., divining the outlines of our invisible prison (formerly known as Fate) via a close study of anomalies in animal entrails. Only instead of sheep livers and cow lungs, we’re using magazine ads and other middlebrow media images.