Is it so small a thing
To have enjoy’d the sun,
To have lived light in the spring,
To have loved, to have thought, to have done…

SO DEMANDS THE protagonist of Matthew Arnold’s 1852 verse drama, Empedocles on Etna. Though often excerpted (and retitled “From the Hymn of Empedocles”) in middlebrow collections of poetry about springtime, Arnold’s poem bears no traces of uplift. Instead, it’s the anguished final testament of a proto-modern philosopher who struggles to reconcile within his own person the competing and conflicting demands of what we’d today call highbrow and lowbrow dispositions. 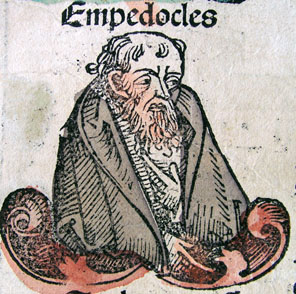 Empedocles, who is climbing the volcanic Mt. Etna (a Beckett- or Eliot-esque “charred, blackened, melancholy waste”) as he versifies, anticipates Kant in lamenting that “mind” and “thought” are inhibiting barriers, which “never let us clasp and feel the All/But through their forms, and modes, and stifling veils.” Sick of doing time in this invisible prison, the abyss-gazing Empedocles plans to literally hurl himself into the abyss — that is, into the fiery crater at Etna’s peak. (Spoiler! He does it.) Although his sentimental, complacent (i.e., middlebrow) companion, Pausanias — to whom Empedocles says things like, “Couldst thou but once discern.Thou hast no right to bliss,/No title from the Gods to welfare and repose;./Then thou wouldst look less mazed/Whene’er of bliss debarr’d,/Nor think the Gods were crazed/When thy own lot went hard” — is left with Stoic advice about seeking a “moderate bliss,” Arnold’s Empedocles is no Stoic. For, shortly after the passage quoted above, Empedocles expresses envy for the lowbrow “village churl,” whose perceptions of what Empedocles elsewhere in the poem calls “the life of life” appear to be direct and straightforward ones — blissfully unmediated, that is to say, by highbrow intellectual conceptions.

Like Schopenhauer, Arnold seems to regard Stoics as impressive but ultimately misguided. Rather than become a groovy, above-it-all nobrow, it’s preferable to torture yourself in the effort to strike a precarious balance between highbrow and lowbrow. (The real Empedocles, whose teachings combined mysticism and political radicalism, was a hilobrow; also check out Friedrich Hölderlin’s unfinished verse drama, The Death of Empedocles.) Which brings us to HiLobrow.com’s latest Double Exposure, one well suited to the chilly, overcast spring day on which it was written. 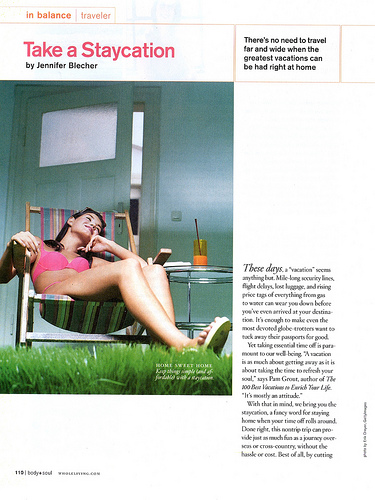 “Take a Staycation,” urges the cheerful, pragmatic voice of Body + Soul, a low-middlebrow magazine — dedicated to “whole living” — published by Martha Stewart Living Omnimedia. After reciting a litany of complaints about travel (too stressful, expensive — implicit but unspoken is too dangerous), an article in the April issue offers tips on vacationing at home. The illustration: a contemporary Stoic, experiencing the moderate bliss of worshiping the sun not at the beach, nor even in her backyard, but in her living room, toes tickled by artificial grass. “Is it so small a thing/To have enjoy’d the sun”? Apparently so. The staycation, a middlebrow fad written up in every newspaper and magazine lately, is a manifestation of Stoicism redux — a worldview that leaves its practitioners feeling calmed, comforted, sustained, no matter what kind of mess the world around them is in. Resist it! 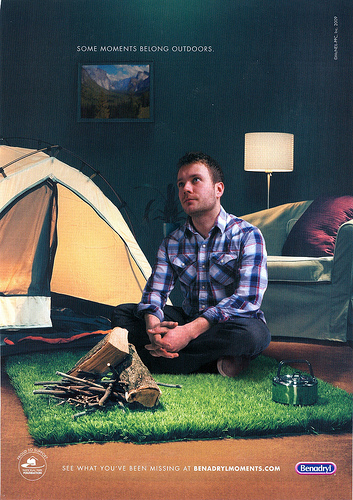 More to HiLobrow.com’s liking is this advertisement for Benadryl, from the April issue of Conde Nast Traveler. Here, a fellow who has apparently been counseled — by well-meaning loved ones, who worry that his allergies will flare up if he goes camping — to camp indoors, instead. In his living room, on artificial grass. So there he sits, our would-be Stoic, in a lotus-like position, struggling to achieve resignation. Take a look at the expression on his face! His staycation is driving him insane.

“To have lived light in the spring,/To have loved, to have thought, to have done…” — these are not the ambitions of a Stoic. Nor are the lines that immediately follow: “To have advanced true friends, and beat down baffling foes.” Yes! HiLobrow.com approves! Do all these things!

But first, you have to get off your AstroTurf.

This is the third in an irregular series of posts seeking access to the dominant discourse’s secrets via holographic scrutiny of two or more fraught images.