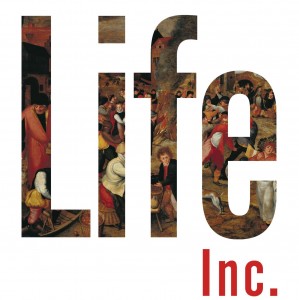 DOUGLAS RUSHKOFF’S BOOKS include novels, cyberspace memoirs, works of media criticism and religious exploration, and the cult classic Stoned Free: How to Get High Without Drugs. But with the forthcoming Life, Inc.: How the World Became a Corporation and How to Take It Back, Rushkoff makes a bid to join the ranks of Lewis Hyde, Murray Bookchin, and Henry David Thoreau as a hilobrow political economist par excellence.

Tracing the history of the corporation in the West, Rushkoff uncovers the dark side of the Renaissance, when princes first sought to take control of the value created in everyday exchange by licensing groups of investors to skim from commerce and productive labor, redefining plunder as profit. What began as a kind of economic droit de seigneur became Corporatism — an unquestioned set of assumptions about work and value that now infiltrate every facet of modern life. Rushkoff wants us to question this “new normal” by creating value amongst ourselves — in our towns and neighborhoods — through barter, local currencies, and other cooperative ventures. While utopians have long called for a political-economic reboot along such lines, Rushkoff’s suggestions seem sound and down to earth.

But hey, you be the judge! True to his message, Rushkoff is sharing the book as a guest blogger for the next couple of weeks at BoingBoing. And for a taste, you can check out the trailer for the book right here:

We recommend you take the plunge and acquire the book. But don’t steal it! Instead, buy a copy at your local bookstore, and when you’re finished, pass it on. Or better, trade it for child care or fresh greens or a room-cleaning. To paraphrase Abby Hoffman: Share This Book!