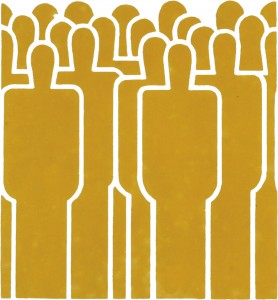 BORN IN 1900, German artist Gerd Arntz designed a pattern language for life in the twentieth century. His prints and designs were intended to further the purposes of a socialist world even as they dreamt it into being. A protege of Otto Neurath, Arntz labored in the febrile utopia of interwar Vienna before immigrating to the Netherlands to escape the rising tide of fascism. His central work in that time was the elaboration of some four thousand iconographic symbols depicting the activities, desires, labors, and lures of modern life. He called these figures Isotypes, a freeform acronym for “International System of Typographic Education.” He hoped they could be used to disambiguate the specialized rituals of bureacracy; they survive today as stark and indelible reminders of a disorienting century. 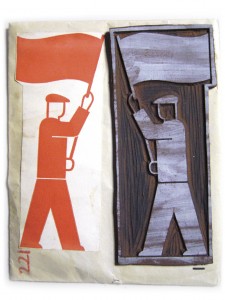 Arntz developed over four thousand isotypes, many consisting of syntactical variations on a theme. The generic pawn-like figure for man, decorated with various icons inscribed within its bulk, could stand for a baker, a teacher, an engineer, or a scribe. But even if the outline of many figures was the same, each variation required its own handmade linocut. It’s as if the symmetry and interchangeability of industry furnished Arntz a visual grammar, an idiom for communicating with the enlightened masses, long before it could provide him with a means of production. 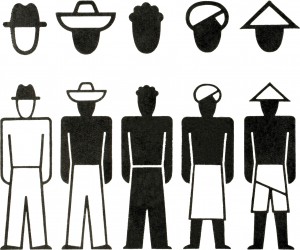 The iconographic grammar Arntz created to effect the enlightenment of the masses persists now in debased idioms; our symbols wink and lure, beguile and correct, discipline and punish. The future into which Arntz shone his art was a fraught one; the only options it offered the thinking person were sundered hope or turgid obedience. It seems to us as if Arntz looked into this future and said, Yes — and…. Arntz pursued a tragic vision of clarity, perhaps noble, but certainly impossible. Today, the quotidian totems that flicker on our desktops and stand erect on airport stantions are the minor spirits of a softly coercive magisterium, a world of long queues and capthchas and telephonic labyrinths. It’s a world that leaves many chilled and ennervated, defeated and domesticated. But looking at Arntz’s art, we see a thoroughbred intelligence at work — ironic and engaged, tragic in its abandoned wisdom, luminous in its effects — and catch a glimpse of another disposition.

Arntz’s life and works are richly documented in an online exhibition created by the design firm Ontwerpwerk and realized with the cooperation of the Municipal Museum of the Hague (which holds the Arntz Archive) and the artist’s son, Peter. Arntz’s collaborations with Neurath, his own charmingly engagé prints and other works, and some six hundred of the isotypes are presented there in stark Modernist splendor; it’s a site that repays many visits.

Images of Isotypes by Gerd Arntz, 1930s, and Isotype with linocut (photo by Max Bruinsma), above, appear courtesy of the Archive Gemeentemuseum The Hague, The Netherlands.