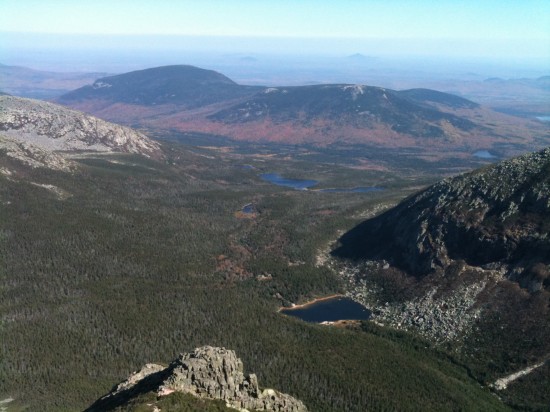 The Taiyi summit nears the seat of heaven;
linked mountains stretch to brink of sea.

Looking back, see white clouds combining;
Entering the green haze, it is nothing.

Seen from the middle peak, the sectioned fields change;
Shadowed and sun-splashed, the many gorges vary.

Looking for human lodging for the night —
Query the woodcutter over the water.

The original poem (which I have via How to Read Chinese Poetry: a Guided Anthology, ed. by Zong-Qi Cai, with his lovely and illuminating commentary) was composed in the lüshi verse style of the High Tang, with lines strongly divided into two- and three-syllable feet running in couplets linked by rhyme, logic, and enjambment. Of course they were not punctuated. Above I’m trying two methods of recreating these effects — the first centering each line on a big caesura, the other using punctuation in modern, Western style. The second, familiarly-puncuated version follows (fortuitously, but so it goes) the method of David Hinton, Wang Wei’s most recent well-known English translator, although Hinton’s collection I think does not include this poem.

We’re always struggling with the apparent multivalence of classical Chinese poetry — the way the openness of the language seems to permit so many readings, combined with the difficulty of translocating the tonal, lexical, and ideographic effects of the originals into alphabetically-styled verse without either losing much of the force or going all specious with talk about picture-writing and orientalist exoticism. Some of the most compelling work has grappled with these challenges by producing multiple versions of single poems —Eliot Weinberger’s Nineteen Ways of Looking at Wang Wei famously essays 19 versions of a single poem. The poet and critic Yunte Huang’s Shi: a Radical Reading of Chinese Poetry breaks each poem into several parts: an annotated translation alongside the original in characters; a “radical translation” that glosses the roots of the original characters, and a “diagnostic translation” that compares effects in Chinese with those produced in and by English. Of course, the constraints of the printed codex get in the way of doing much that is fluid in this vein; Weinberger’s book could look deeply into *one* poem, but not ten or a hundred of them.

Yesterday, I shared the two versions of “Zhongnan Mountain” reproduced above by way of a public Google document, canvassing readers for their responses. Some had a strong preference for one or the other, while others signalled a reluctance to choose — itself a perfectly defensible choice. When it comes to translation, choosing (bespite being the very work of the critic) is also losing — an art which, pace Bishop, it is hard to master. Ideally, we would have an edition that presents a set of translated variations on poems along with their originals, allowing the reader to float from version to version elegantly and seamlessly — to bring up multiple versions, to choose which ones she prefers, and even perhaps to make a version of her own to complement or contradict the others. A poem in translation, after all, ideally exists as a kind of quantum field of literary possibility: a reader jumps in, and the poem is instantiated in the given moment — as one state that exists in a cloud of possible states.

The poem above struck me with special force, coming to me as it did after a weekend spent on Maine’s Mount Katahdin. The days on the mountain were bright and violently windy; we had planned to take a narrow, exposed path to the summit, but were warned away from it by rangers. At the top, we found ourselves amidst a happy, loosely-joined argonaut folly of summiting hikers, some of whom had come off the knife-edge trail. Emboldened by their result, we returned by that route, and were happy for not having to choose one way over the other after all.

In the Wang Wei I found echoes of the work the mountain did on me: the braided vistas merging, the gulfs and abysses seducing, the zones of forest succession merging and disappearing into one another as one moves up and down slope. Wang Wei catches a patterning that is always already in us and around us, but which a mountain often brings into focus: combination, nothingness, change, and variation. His two middle couplets in fact end in the words he, wu, bian, and shu— four concepts that buttress Chinese Buddhist cosmology. Our haze on Katahdin was different from Wang Wei’s, however: on an otherwise clear day frenzied by a warm wind, a brown haze blown from the cities to the south, apparent only once we were well above it on the shoulder of the mountain shoulder, banded the horizon.