Cross-post is a series of occasional other voices, featuring posts from selected blogs and other writings across the web.

Our third participant in this series is both a person and a place. Toby Ferris is the author, architect, chief planner, resident art historian, and head of excavations at Anatomy of Norbiton, a web utopia in the original sense of the word (ou-topos): no place. But also (eu-topos): ideal place. The contradiction inherent in the founding myth of utopia, indeed, in its very definition, has fueled its continuance as a concept, and as an aspiration, to this day. No-place, or ideal place? Does this duality deny the ideal its reality, or rather liberate it to thrive in a space unbounded by the merely physical? 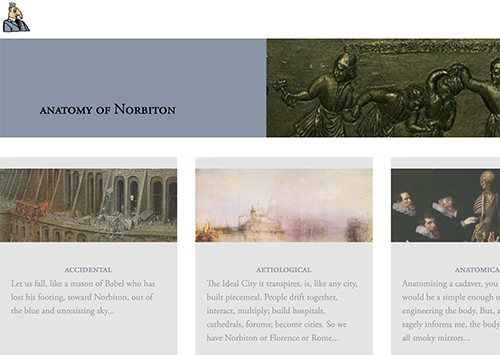 There exists a certain nostalgia, not only for non-places like More’s imaginary island, but for the early days of the world wide web, before it was colonized and enclosed, not only by corporate interests and the lengthy encryption chains that underlie buying and selling, but by any definite idea of what cyberspace — and its commons — might be. Before Facebook, before social media, before blogs, before “influencers”, even before search engines really had anything to properly search, there were innumerable experiments in what could thrive in this new space, and how, and why. Certainly any number of those did not make the grade quality-wise, but there was a primordial soup of creative ferment, out of which could evolve… well almost anything, we thought.

The Anatomy of Norbiton hearkens back to those early days of cyberspace, not in its composition and polish, which are considerable, but in its attitude of exuberant experimentation. Now, Norbiton being Norbiton, this happens within the confines of a city, perhaps there are closely-built up terraced houses, perhaps a new-ish Brutalist sports arena, perhaps, lower down, the remains of the Romans, or a Viking-era hoard. There are local characters to meet. And rituals, civic and (quite) otherwise. But as we well know, great art thrives within limitations, and so Norbiton, whose proper location is our shared imagination, is not fully defined, nor truly confined, by its fieldstone walls and well-maintained shops in the center.

Appropriately, the first entry is “Accidental“. How did the Anatomy come to be? Where is Norbiton? Why is Norbiton? What’s this got to do with the Tower of Babel, or Pieter Bruegel, or the internet? If the unexamined life is not worth living, then the examined one must be worth writing. Right?

In its own words:

What sort of a life can you lead if you quit your job, sever all social ties, and allow yourself to glide to destruction on your meagre savings and ballooning credit?

The answer turns out to be, a surprisingly pleasant and constructive one.

Anatomy of Norbiton is a complete and systematic description of an attempt to build not just a life beyond failure, but the IDEAL CITY OF THE FAILED LIFE. In Norbiton.

And yet, that explanation raises more questions than it answers. Intentionally so, as Norbiton will not submit to simple summary. The entries are arranged alphabetically, and seem comprehensive in their conceptual claims. Yet for all that, Norbiton is not properly termed a planned city. It is rather something one falls into, not unlike Icarus; but unlike Icarus, one surfaces, and survives, thanks to an adolescence of required swimming lessons down at the Norbiton Y.

Survives as…a tapir? The whimsical illustrations for our narrative stand-in and guide to Norbiton are by Anna Keen, whose work encompasses not only character art, but landscapes that oscillate with the paradoxes of utopia, drawing from influences ranging from Turner to Thomas Cole’s The Course of Empire.

And Norbiton will soon be here. The Anatomy will be cross-posted at HILOBROW, block by block, starting tomorrow. Tune in!

We hope you will enjoy — and we hope you may be inspired to start blogging (again) yourself.

Anatomy of Norbiton on HILOBROW