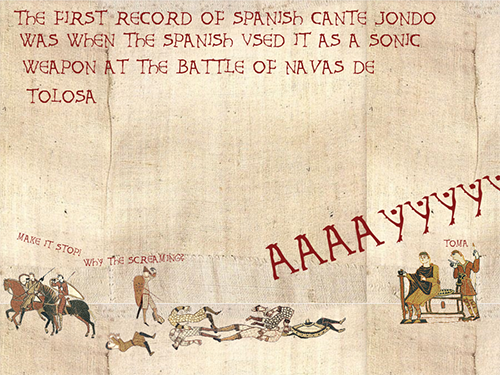 Memes have come a long way from Richard Dawkins. They have morphed from Dawkins’ initial coining of the term as “an idea, behaviour or style that spreads from person to person within a culture”, to concrete instances of DIY digital art. From the Situationist détournements of Impact-font-plus-image, to much-remembered reaction gifs from TV and film, to the pointedly absurd Dada of Doge, memes thrive in replication with slight variations, advancing and receding in influence as new ones take over the cultural petri dish. With Dawkins, Eye Candy might argue that memes do indeed evolve, or at least, “evolve”. 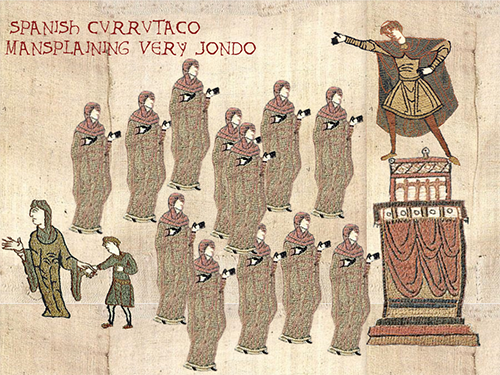 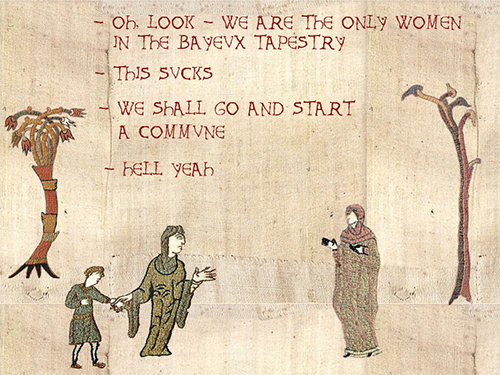 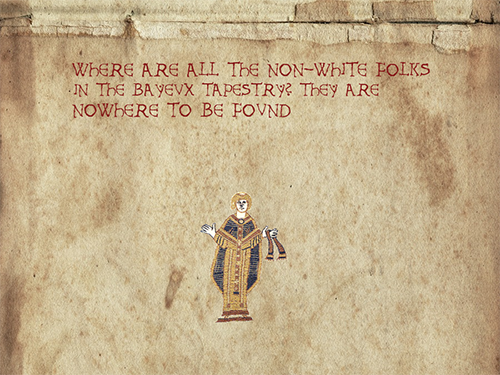 But in addition to looking forward, memes can look back. Certainly there have been iconic images in the past that were recognized as such by their contemporaries, or at least those contemporaries’ pre-digital descendants, and it seems unfair that they are denied entry into this particular field of cultural play simply because the term (and computers) hadn’t been invented yet. Hieroglyphics, Totem poles, the Mona Lisa, mandalas — all are ripe for riffing, as Duchamp demonstrated in 1919 with a pencil in lieu of a mouse. 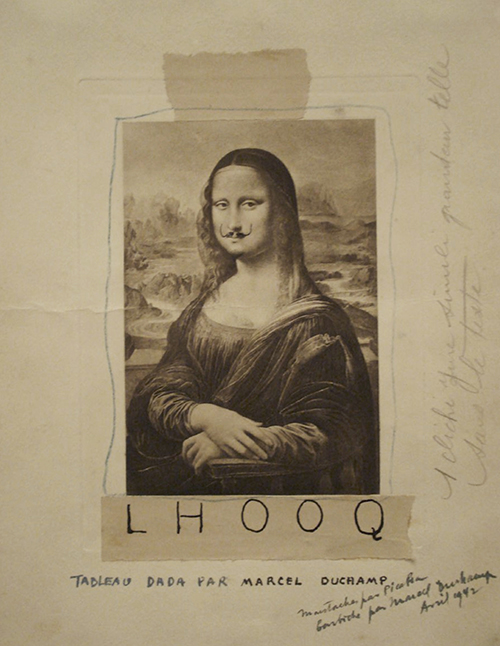 Which brings us to textile art. One of the most famous sequences of stitching is the Bayeux Tapestry, painstakingly embroidered along a long strip of cloth depicting the Battle of Hastings in 1066 and the Norman Invasion of Britain by France. Arranged not unlike a long comic, the Tapestry, a long scroll “read” left to right, depicts panels without borders of knights in armor, horses, battles, castles, a comet, the sea, the English and French, and more. The look is unmistakeable. 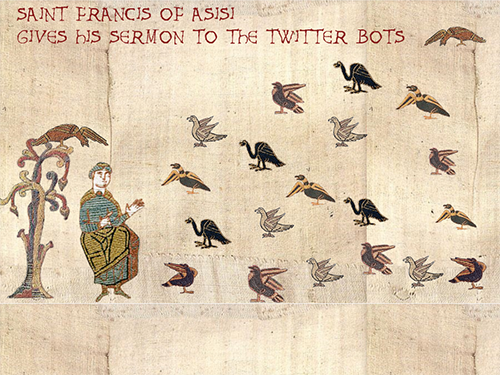 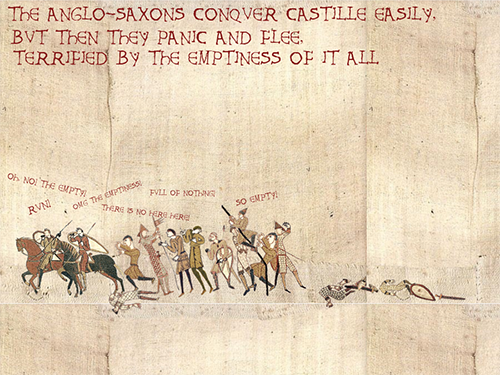 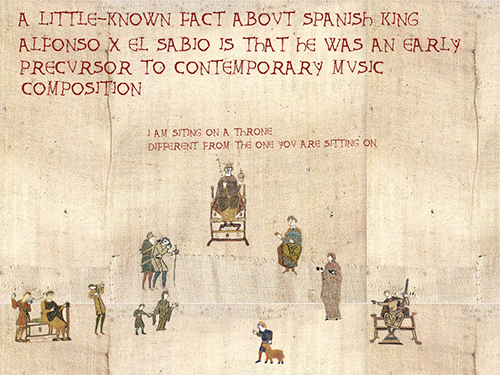 And now it is meme material. 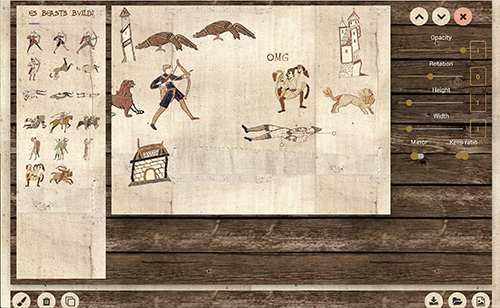 Sound and media artist Kamen Nedev (on Twitter as (((o))) Acoustic Mirror) has delved into this rich archive and created medieval-looking memes for the modern era, deploying bits of Bayeux and embroidery-adjacent font, to anarchic and delightful ends. Using the Historical Tale Construction Kit, a Bayeux-generating web app created for just this purpose (and modeled on a previous Flash incarnation by different makers), Nedev constructs panels with a keen eye towards history, an ear for language, and a nod to Monty Python, sashaying back and forth in time and reference with an irreverent riposte. 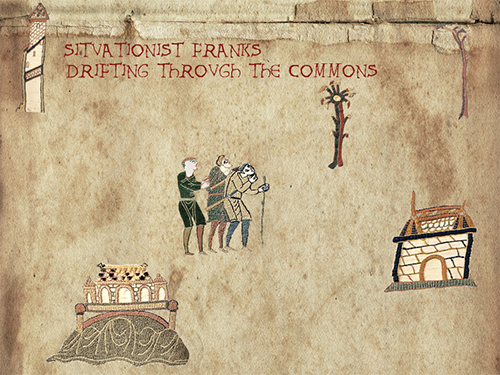 “About this tapestry thing…

This is not the kind of work I normally do – I have always been rather useless at anything visual. … The series I’ve been doing with the app has all the typical characteristics of social media: it is haphazard, humorous, often reactive, improvised, and sometimes a little cathartic. A lot of it is rather cryptic – I often refer to some generally-prevalent themes and subject matter that may be difficult to decode a few years (or a few weeks) from now. I also play a lot with different languages and cultural contexts, which might obstruct reading.

Still, looking back at what I’ve done so far, I think it does somehow stand on its feet. At least, I think of it as a kind of practice that doesn’t require me to take it (or myself) too seriously. This I find liberating. I should do more of it.”
— Kamen Nedev 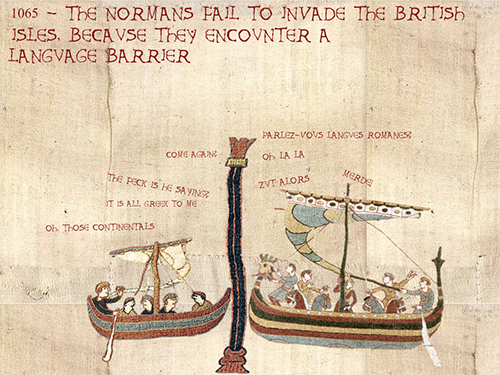 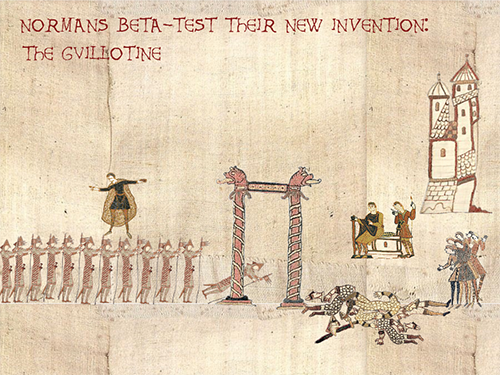 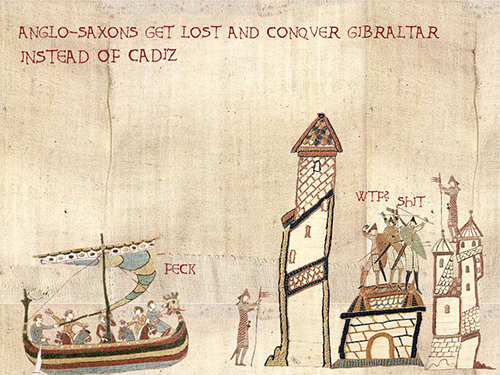 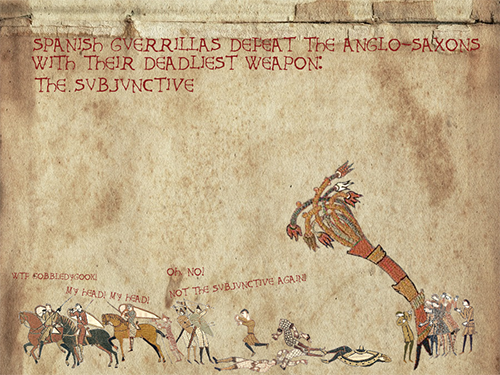 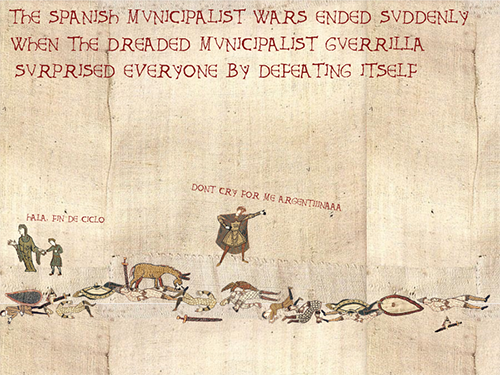 Not unlike ancient components in our DNA whose usefulness we’re just now beginning to understand, this re-sequencing of our cultural ancestry is an idea whose time has come. Because the Middle Ages? As we’re all coming to know very well, we have a lot more in common with that era than we thought.

Kamen Nedev is a sound artist, flâneur, fugueur, and independent cultural producer. Since 1986 he works and tries to live in Madrid, Spain. Since 2005, under the Acoustic Mirror moniker, he has been working on a line of research in phonography, sound art, and radio art, with an emphasis on the soundscape of urban space as well as social sound production, situated listening, and militant sound investigation.