The problem is art is BORING. It just sits there. What’s wrong with a little entertainment? It needs some livening up, some relevance, some – animation? Right, let’s digitize some of this old stuff and add some action, maybe sound effects or dialogue, brighten up those colors a bit, how about a laser pointer . . . oh and bullet points to explain things. I mean “metadata.” 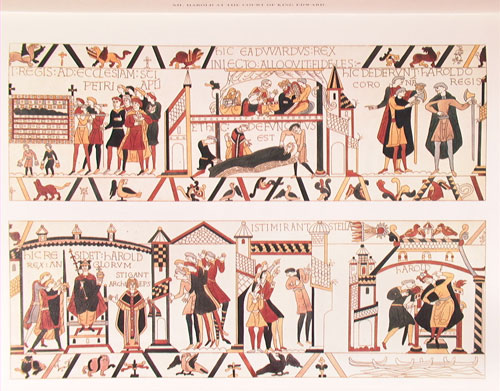 First boring masterpiece, the Bayeux Tapestry. Correction: not a tapestry. Not a painting either. Actually it’s more of a history textbook, with embroidery instead of printing on one really long page (about 230 feet). That’s a lot of nights of no TV.

It’s really a giant comic book page, with fight scenes, supernatural effects, integrated fonts, old-skool superheroes (the “king”) and a win for the good guys (the “French”). One long horizontal image: there’s no way around it, to put it online would involve scrolling. Hmmm, scrolling . . .

It took almost a thousand years, but it was totally going there.

I went halfway around the world to see Peter Greenaway’s reinterpretation of a copy of Paolo Veronese’s Wedding at Cana at this year’s Venice Biennale. Housed in the refectory of the Benedictine monastery on San Giorgio Maggiore in Venice, the original Veronese was taken by Napoleon in 1797, sliced up for transport, and now resides, pieced-together, in the Louvre. All that were left were hooks, and some wire. But art restoration techniques have advanced to the benefit of both thieves and re-enactors, and what is hanging now in Venice is a giant copy, re-crafted brushstroke by brushstroke – and slice-mark by slice. 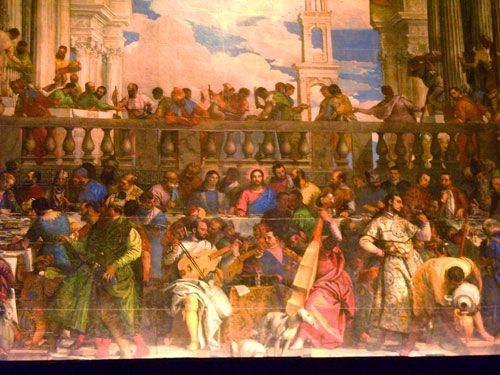 In other words, your typical fake boring masterpiece. I did the respectful thing and watched a movie on top of it. What Greenaway, a film director, did was to create a 3D model of the painted scene in the computer, which he then strobed with weather and lighting effects, projecting only the highlights and shadows back onto the painting. The resulting vertigo plunged the viewer into the painted tempest despite the ACME barcode in the corner.

And what’s a teaching moment without a laser pointer? The familiar dot circled around various characters to align with Greenaway’s dialogue, purposefully middlebrow, comprising the usual wedding complaints and small talk: it’s too crowded, is the buffet closed, who invited the happy fun guys in the middle, what are you doing later, Jesus Christ, we’re out of wine – no, wait!

The dialogue was in English and Italian AND subtitled, for you art-film nerds. Along with the main projection/canvas mashup there were six simultaneous and changing detail shots projected through the empty refectory windows above, so that you had to either migrate to the back of the space and miss the close-ups, or turn in slow circles and watch your back.

[Caveat, audience video below shows 8 minutes of an hour show in a 260 degree installation.]

The after it’s over, you realize you’ve spent an hour doing a close reading – of the Veronese. This was new media in service to the old, to the benefit of both.

[link to Tapestry animation via @kirstinbutler]