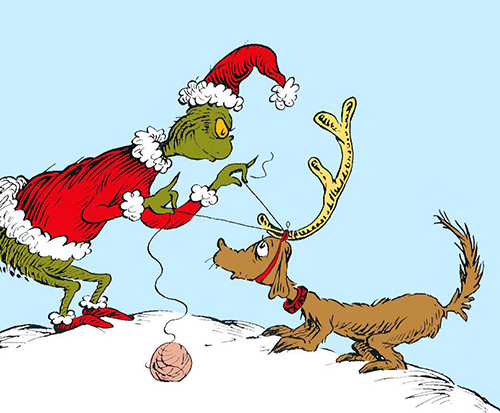 Reading Middle English is an experience of the uncanny — the language is new enough to be mostly decipherable by today’s English-speakers, especially if you sound the words out phonetically and pronounce any “weird letter” as “th”; while old enough to be, at first and often repeated glances, a foreign country. A foreign country shimmering on the edge of the uncanny valley; one perhaps located just south of Who-ville and north of Mount Crumpit…

In the spirit of the season, Eye Candy would like to direct your attention to our favorite festive character, The Grinch. Of course such a classic creature would have a deep historical and linguistic pedigree. The Twitter account @agrinchtherwas, created and translated by medieval Arthurian scholar Dr. Paul Moffett, takes up this challenge, offering the Dr. Seuss favorite with a twist: it tweets out the tale in Middle English each year, a few rhymes a day, starting on December 1.

We’ve re-posted the beginnings of the poem here; check @agrinchtherwas on Twitter for the latest. And if you imagine it read by Boris Karloff, so much the better: