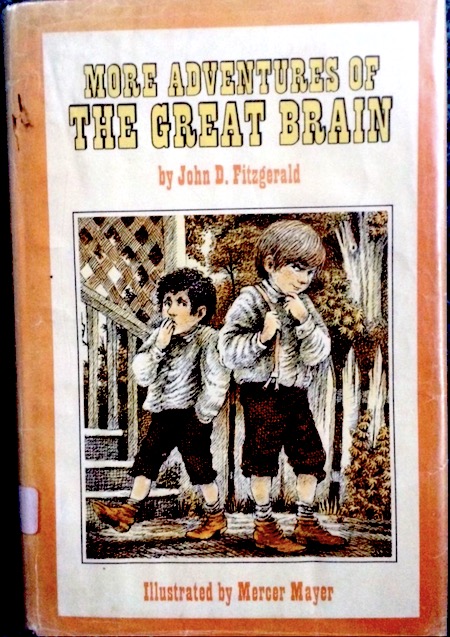 In the first of several sequels to 1967’s The Great Brain, John D. Fitzgerald brings us back to Aden, a fictional Utah pioneer town in 1896 — and recounts Tom Sawyer-ish stories loosely inspired by his own experiences as an adolescent growing up in Price, Utah, in the nineteen-teens. Like J.D., the young narrator of these stories, Fitzgerald was the son of an Irish Catholic father and a Scandinavian Mormon mother; and he had a conniving but not entirely wicked brother, Tom. At the end of the first book, Tom (the self-proclaimed “Great Brain”) had seemingly reformed — i.e., by refusing to accept payment for helping the suicidal Andy Anderson adjust to his wooden leg, and by returning J.D.’s genuine Indian beaded belt. Tom is back at his old tricks again, however, in such yarns as “The Night the Monster Walked” (in which monster tracks, which appear to lead from Skeleton Cave to the river and back, lead to a panic), “The Taming of Britches Dotty” (about the transformation of a neglected girl; Tom teaches her to read, which is admirable — but his mother’s efforts to make Dotty conform to female gender rules is less so), and “The Death of Old Butch” (about Aden’s mourning of the death of a mongrel dog). Mercer Mayer’s illustrations are terrific.