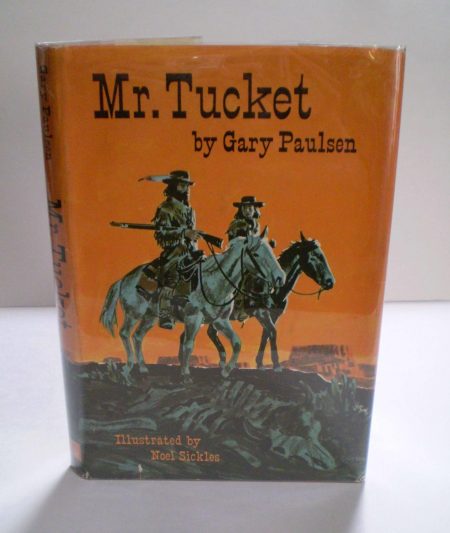 Before Gary Paulsen was known as the Newbery Honor Award-winning author of YA survivalist novels like Dogsong (1985) and Hatchet (1987), he wrote this exciting, amusing, and also tragic Sid Fleischman-esque yarn about Francis Tucket, a 14-year-old who — while heading west on the Oregon Trail with his family — is abducted by Pawnees. Rescued by Jason Grimes, a one-armed fur trader who refers to his new sidekick as “Mr. Tucket,” Francis takes a crash-course in frontier survival skills. He learns to hunt rabbits and antelope, build a shelter against the elements, and — perhaps most importantly — eschew confrontation with potentially lethal enemies. Discretion, after all, is the better part of valor. Grimes is a no-nonsense mentor, whom Francis increasingly emulates… until a family is massacred, when we see a much darker side of the Jeremiah Johnson-esque mountain man. I wouldn’t call this a revisionist western, exactly; however, Grimes does make it clear to Francis that the Pawnee never attacked white settlers until their land began to be stolen; in fact, he encourages Francis to forgive and forget his own trials.

Fun facts: In the sequel, Call Me Francis Tucket (published a quarter-century later in 1995), Francis attempts to reunite with his family… alone, this time. Other titles in the series include Tucket’s Ride and Tucket’s Gold.