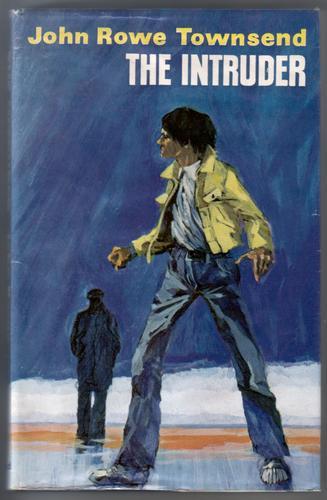 In my favorite John Rowe Townsend novel, the near-future YA thriller Noah’s Castle (1975), when a teenage boy finds his home transformed into a fortress, he must struggle — against centripetal and centrifugal forces — to decide for himself what the right course of action may be, even if that means defying paternal authority. This earlier novel, which is also a tense atmospheric thriller, finds our protagonist, 16-year-old Arnold Haithwaite, an adoptee driven out of his home by a creepy, manipulative stranger who claims to be the real Arnold Haithwaite, struggling with a similar predicament. The novel’s setting is very English — a nearly abandoned port town in England, inhabited by a few old-timers. Arnold makes a living guiding tourists across the silted-in harbor’s treacherous sands; as you can imagine, the sands (an a ruined church) become the scene of a dramatic chase and near-death experience, for Arnold and Jane, a love interest of sorts. Will Arnold learn the secret of his own identity — and stop the stranger from taking over his home?

Fun facts: John Rowe Townsend (1922–2014) was not only a talented writer of many “juvenile” mysteries, but author of the definitive Written for Children: An Outline of English-language Children’s Literature (a 1965 survey, revised most recently in 1990). The Intruder, which won Edgar and Horn Book awards, was adapted as a fondly remembered 1972 British TV series.