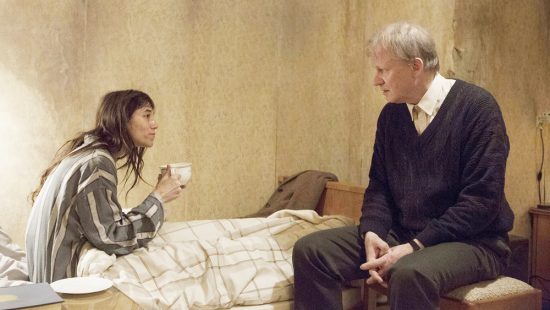 One of the questions at the heart of Nymphomaniac is: Why does this movie exist? The film is not a political statement, it’s not particularly titillating, it’s not humane; it’s not even a character study, at least not by convention — the protagonist spends most of the film screwing without reflection, without joy, without exhibiting much of an inner life, then describing it all in near-gibberish to a dull interlocutor. The answer is that Nymphomaniac is an expression of its director, Lars von Trier, who is not currently giving interviews.

So it’s relevant to ask who Lars von Trier is, and of course there’s a ready line for that: callous shit-stirrer, prone to depressive episodes and debilitating neuroses, allegedly misogynist, maybe racist. It’s been said many times that the women in von Trier’s films are conduits for his personal torments, that he wrings harrowing performances from his female stars without regard for their mental health. At Cannes in 2011, he was declared persona non grata after making bizarre remarks about Hitler at a press conference: “I really wanted to be a Jew, and then I found out that I was really a Nazi… What can I say? I understand Hitler.” (Von Trier was raised by a Jewish father, but his mother, on her death bed, admitted that his biological father had been German.) Afterward he took a “vow of silence,” which is why we’re not hearing from him now.

Nymphomaniac would seem to reinforce the worst bits of his reputation. Told in two parts (the first of which will hit theaters tomorrow; the second comes out next month), the film is a woman’s lifelong sexual odyssey, as recounted by the broken, bleeding protagonist, Joe (Charlotte Gainsbourg) to the gentle loner, Seligman (Stellan Skarsgård), who found her lying in the gutter. The film contains as much insight into the female psyche as a dad joke; as a meditation on female sexuality, von Trier might as well have directed a pillow fight. The very idea of Nymphomaniac is politically uncomfortable, and, moment to moment, the film is sometimes outright offensive: Joe has some deplorable things to say about two African men she solicits for a threesome; when Seligman takes issue with her language, she offers a deplorable defense.

Joe is presumably a mouthpiece for von Trier — I presumed as much, anyway, then got angry at him — but why presume? Because Nymphomaniac made me feel something and, being unable to make sense of the film, I fixated on the wall shadow of its creator. My instinct, when his films piss me off, is to disregard von Trier as a cynical provocateur or a bigot. But I don’t know his relationship to the content of his work, or to his characters. As a public figure, von Trier is as confounding as his films.

Judy Berman, quoting Dissolve writer Noel Murray in her review for Flavorwire, points out that the film’s central dialogue might be an allegory for the relationship between von Trier and his critics: Joe details her sexcapades, and Seligman, an enthusiastic old square, interprets them with reference to fly fishing, Fibonacci numbers, Bach. His comments are relentlessly insipid: voice of the Everyreviewer, he makes sense of a senseless narrative by grafting on his own, irrelevant preoccupations. Fair enough. 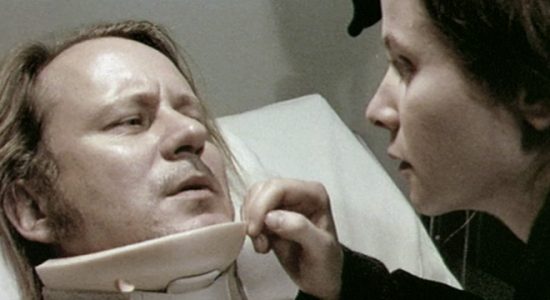 It’s a cliche that Lars von Trier is cruel to his characters as well as his audience. His films demonstrate a special kind of sadism, though — a pathetic sadism, wherein the pleasure comes not only from causing pain but from pitying the victim. In Breaking the Waves (1996), Emily Watson plays a whimsical woman from a Calvinist community in the Scottish Highlands, whose husband, paralyzed in an oil rig accident, asks her to sleep with other men in order to keep him alive (the rationale is never really clear). The sex is much less pornographic than the anguish: wide-eyed, bitten-lipped Watson glances lingeringly at the camera, which lingers on her sobbing face as she allows a man in a fisherman’s sweater to fuck her in the dirt, or cries to the God that she thinks has abandoned her. Likewise, Nymphomaniac seems more concerned with its protagonist’s suffering than her pleasure. And it knows what it does, framing her as the victim of a sexist world — Seligman waxes on about sexual double standards — even while it depicts the nympho’s comeuppance in excruciating detail, savoring the plight of the ruined woman, as Sarah Nicole Prickett put it in an excellent review for Artforum.

Watson carries Breaking the Waves, as does the chemistry she shares with Skarsgård at the beginning, but her high-spirited suffering grows more cloying the further it’s stretched. The other characters are dollar-store devices in service of a plot that makes little sense by real-world logic and may not contain its own. To call it masturbatory sounds like a cop-out, but I can’t think of a better way to say it: the film seems to follow the same perverse determinism that, in another film, would see a hat-tip from a friendly cowboy end with a distended anus. (The goofy, bittersweet ending is von Trier throwing us a towel.)

But Breaking the Waves, like Nymphomaniac, makes you feel something. Von Trier is the rare artist with the power to make you genuinely miserable — to rip your world, if sometimes through haphazard clawing, which is an achievement of sorts. There are two kinds of creative masturbation: one is to let your perverse impulses swallow your story sense; worse is to make something with no thought for your audience. Von Trier might be cruel, but at least he cares: “No matter how ridiculous it might seem,” he told Sean O’Hagan of the Guardian, addressing the negative response to Antichrist at Cannes, “the film, like all my work, is made from what I would call a pure heart. I am not ever trying to, as you say in England, take the piss.” 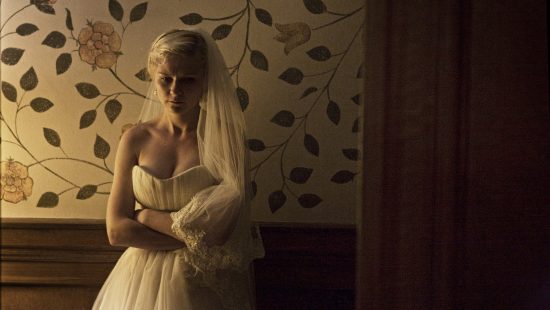 Nymphomaniac is the third installment of von Trier’s Depression trilogy, which includes 2009’s Antichrist (Gainsbourg plays a woman grieving for her dead son, who goes mad during a wilderness retreat with her husband) and 2011’s Melancholia (Kirsten Dunst plays a severely depressed woman who faces the end of the world with her sister/caregiver, played by Gainsbourg). Each film reflects the director’s own demons, and thematizes the feeling, at the pit of depression, that The Truth is horrific.

Antichrist is, at turns, goofy and punishing (Charlotte Gainsbourg explains the sinister nature of acorns, issues blood-handies; a talking fox, the kind you might see at Wall-e-Weasel, eats its own guts); Melancholia is a beautiful, suffocating movie that induces the state it depicts. Nymphomaniac, which is somewhere in between, concludes the trilogy’s hopeless arc: in Antichrist, nature is evil; in Melancholia, the world ends; in Nymphomaniac, love is meaningless. There’s no redemption, no positive counterforce to the gravity of suffering, not even any fun, really — only compulsion unto ruin. Many lovers in to her story, Joe finally falls in love with Jerôme (Shia LaBeouf), the man who took her virginity; when they finally get together, she loses all sexual sensation. “I CAN’T FEEL ANYTHING,” she wails, the way Dunst, cheered momentarily by her sister’s meatloaf, cries: It tastes like ashes.

By this reading, Nymphomaniac does have a point, but not a very convincing one. After two volumes and several hours, having watched Joe (played in her younger years by Stacy Martin) bed man after man, one still has little sense of her character beyond her preoccupation. “Nymphomaniac” is Joe’s only real identity, and her insights about the world — “For a human being, killing is the most natural thing in the world. We’re created for it” — are not illuminating.

But Nymphomaniac is an engaging story, beautifully executed, and the most interesting parts, ironically, are the occasional instances of love and connection — the agonizing scenes in which Joe watches her father die, or the surprisingly tender scenes in which she has sex with Jerôme (Stacy Martin’s love scenes with Shia LaBeouf are somehow the sexiest ones in the film). These are the parts when von Trier steps in to sabotage his own creation. Joe’s dying father is played, inexplicably, by Christian Slater, who delivers a good performance that’s not nearly good enough to distract from his being Christian Slater (Berman, at Flavorwire, suggests this might be deliberate miscasting, and I agree). Major characters are played by multiple actors who look nothing alike — which is sometimes poetically jarring, maybe a reflection of how suddenly a life can turn — but it does mean that Jerôme’s final, climactic betrayal is performed by a guy we’ve never seen before.

Why undermine his own good work? I dunno. Maybe there’s no reason for it besides intuition, which is one way in which Joe might serve as von Trier’s proxy: we never really know her motives. Any reasons provided are afterthoughts, and they’re never very convincing. But that rings true to life — a lot truer, anyway, than the notion that our proclivities are revolutionary, a theme that emerges in Joe’s retelling but seems to me like a clumsy justification for the film’s existence. “There are some things it is not good to explain or analyse,” von Trier told the Guardian’s O’Hagan, who’d asked about the genital mutilation in Antichrist. “And, also, my explanations are always banal and stupid.”

I’m not sure why my instinct, watching a film like Nymphomaniac, is to moralize. Being moral is exhausting. Every one of us is fighting a private, lifelong battle with bad ideas; art is for release, and for tacitly commiserating about the things we can’t admit to. So it seems like bad faith to condemn an artist’s character for the content of their work, even though I often do it.

At the same time, the artist is always relevant to their product. And Lars von Trier is especially relevant to Nymphomaniac, which is nearly impossible to make sense of without some thought toward his intentions — which are, of course, impossible to know. Love song of the old, troubled pervert? Toast to female suffering? Denunciation of love and possibly all human tenderness? Sure. Or, maybe, a beautifully executed story, influenced in part by the perversions of its maker, with frustrating interstitials meant to confound those who might read too much into the motives of someone who doesn’t understand them himself.