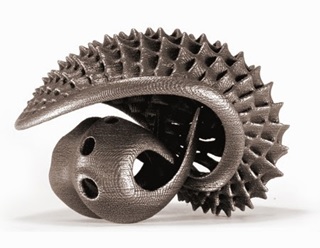 The Santa Cruz, Calif.-based artist Bathsheeba Grossmann creates sculptures using CAD (computer-aided design), 3D modeling, forging, and mass production. Her works are futurist, almost science-fictional. Inspired by mathematical concepts they nevertheless feel almost organic. They’re small — designed to be held, manipulated; they’re computer-netsuke. Because they don’t feature swords, engines, and so forth, these complex 3D forms — nested webs of space and matter — help me discern what’s so powerful and unusual in the model-making and production design that I’ve talked about in this series.

I interviewed Bathsheeba Grossmann via email in May 2014.

FALSE MACHINE: Your sculptures are inspired by mathematical constructs, but they’re not pure copies or transcriptions of those constructs. At what stage in the creation, or through what process, do you move away from pure maths?

GROSSMAN: Actually I work much less with pure math these days. There was a while when I was one of very few people doing much direct-to-consumer work with 3D printing, and at that time there was almost an obligation to make complex geometrical objects available. There was no other way to do it, and very few other people in the field. So when people wanted these things, I was rather on the spot.

But now there are many excellent actual mathematicians using the medium, and they’re doing that work in spades. Also my math degree is 25 years old now, and I confess it’s become a little rusty. What’s left is my love of symmetry: at its bones, most (though not all) of my work has one of a few symmetry groups which I find intriguing.

To answer your original question: What sort of symmetry a piece will have is a very early-stage design decision.

FALSE MACHINE: Do you keep a self-conscious register of your reasons for doing things with a sculpture, or is a silent awareness or intuition of what must be done?

GROSSMAN: I try to keep it nonverbal. I grew up in a family of writers; that’s all right as far as it goes.

FALSE MACHINE: I was going to ask if you think your sculptures have personality — but perhaps identity might be a better word.

GROSSMAN: They do tend to be very different from each other. I noticed as an art student that many sculptors, as they get into their later years, develop a style that is consistent to the point of being repetitious. I suppose it helps with marketing, but I don’t know how they keep from dying of boredom, so I’ve tried to avoid that.

FALSE MACHINE: Other sculptors I have spoken to or looked at have created toys or playing pieces which have to act together in groups. Differing forms must work as directly observable groups and be shown as such through their aesthetic. They have to ‘work’. Although yours don’t have to ‘do’ anything, they still seem to have ‘families’ or groupings. Can you talk about that?

GROSSMAN: Well, in my head, they fall into classes defined by their symmetry groups. These include: 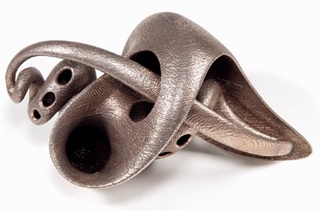 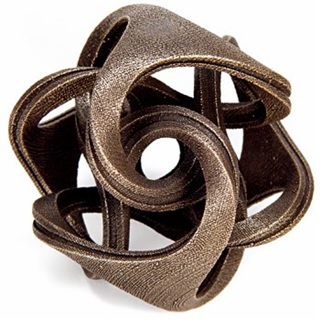 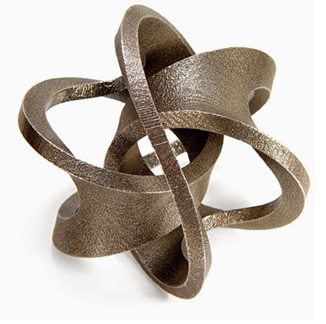 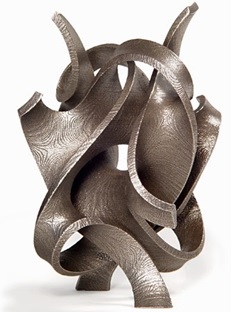 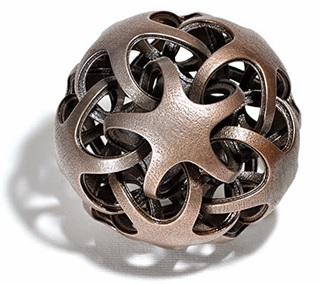 Some are also related by style or form, for example the 4D polytopes in the Math section, or the Ora family in the Sculpture section.

Lately I’ve been working with things that assemble: Tetrabox, for example. 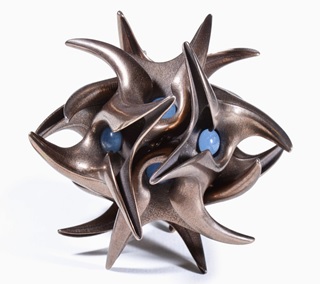 These aren’t exactly puzzles — I’d prefer “toys” — but they’re definitely intended to be experienced as individual pieces, as the group of parts, and as the whole object. 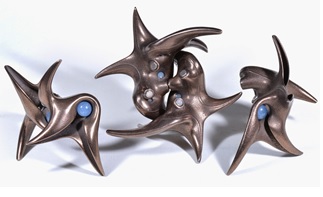 GROSSMAN: Sometimes I think of them as being like bones or shells — static, but in the style of things perhaps shaped by dynamic processes.

FALSE MACHINE: Do different tools change how you think about beauty and form?

GROSSMAN: Yes. Software, especially big things like CAD programs, puts you into the mind of its maker in ways both superficial and profound. I’m mainly a NURBS modeler because I started with Rhinoceros: focused on complex topology and clean surfaces with exact measurements. I’d be a very different artist if I’d started with Solidworks, which skews toward mechanical design and Boolean operations. Differenter still if I’d picked up Zbrush, which as a mesh modeler favors mushy structures with excruciatingly detailed surface features.

I think that what I did choose was the best option for my artistic style and aims… but then in retrospect I would think that.

FALSE MACHINE: Does the length and complexity of the process of design change the kinds of things you make?

GROSSMAN: I’m a very slow worker as sculptors go, it’s not unusual for a piece to take months. The laboriousness of CAD, and the weeks of delay that it takes to get a print, makes me want to make things absolutely perfect. Maybe I waste a lot of time on this… but if I look at some of the knockoffs of my stuff on Shapeways and Thingiverse, maybe not.

FALSE MACHINE: You said you wanted sculpture to be more like publishing. To that end, you made that baby toy: 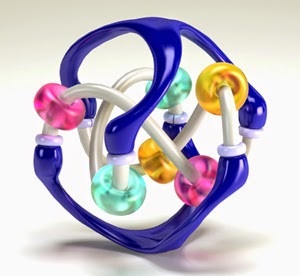 And the Geared Widget: 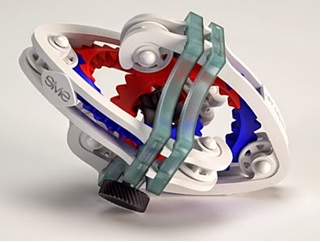 Also, one of your forms has been reproduced at the size of a few microns. Another is, I think, the world’s biggest 3D print sculpture.

GROSSMAN: The Rygo was the biggest in North America when it arrived, but I wouldn’t bet any green bananas that it still is. I’m very sure there are larger pieces in Europe, and particularly Italy, where the DShape printer that created it is housed. 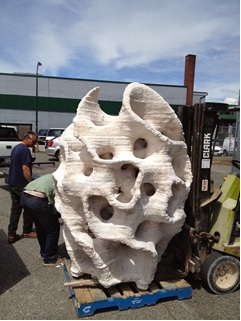 This is a great thing about being a digital sculptor: the designs are translated into sizes, materials, formats that I never thought of. I’m in favor of this. I like sculpture but I don’t like work, so it’s nice when other people do the work part for me.

FALSE MACHINE: Do you think it’s possible to push at the edges of the art world and make it bigger and build a new territory of thought — or will anyone trying that just break through into the neighbouring worlds of toys, tools, or industrial design and have the art in what they do be ignored?

GROSSMAN: Well, in the thousand-voiced Internet everything is ignored, and claimed by existing territories, and hailed as the most amazeballs novelty ever, all at once.

What we’ve seen, as 3DP has become popular, is the start of a new art medium. It’s also a craft medium, toolmaking medium, product design medium, etc., which is what happens when a new tool is invented: people use it for everything.

In the case of metal printing, I contributed to its early adoption as an art medium. No doubt it would have been co-opted for art eventually, but it was largely my work that woke both manufacturer and art buyers up to the idea that sculpture is a thing you make with this tech, as soon as it was available.

I think that did make the art universe bigger. It was ignored by the traditional art-gallery world, but I can’t say I feel deprived by that — customers knew which end was up, and that’s who pays me. I don’t see galleries as terribly relevant in the post-WWW world.

FALSE MACHINE: The casting process for your pieces, particularly the capillary action of molten bronze, seems utterly bonkers. The results are irregular in an interesting way. Do you have any plans to take advantage of the oddities of 3d printing and casting to produce particular effects?

GROSSMAN: Well, we should back up a bit and say that casting is not involved: the steel fabrication that I use is a direct metal printing process using sintered steel powder, followed as you say by a ridiculous infiltration phase which should not work. (That we think this is why Ex One has this patent, and we do not.)

I try to design in ways that respect the strong and weak points of the process. The heavy surface texture doesn’t lend itself to fine detail, while the powder sintering process provides very free geometry. Bulky volumes are expensive, while light lattices are cheap. Certainly it influences one’s style.

FALSE MACHINE: Are there any other unbelievably strange things about 3d printing that the world should know about?

GROSSMAN: Oh, it’s pretty much talked to death lately. What’s important about it, if you ask me, is simply that it allows production of unmoldable objects. It is extraordinary how powerfully and stealthily the prevalence of molding and casting has influenced our physical environment over the roughly 6,000 years since that technology was invented. Now, at last, we can leave that box.

FALSE MACHINE: Have you ever thought about constructing a game around your pieces, or making pieces for a game?

GROSSMAN: Never have. I’ve made a few puzzles, but gaming isn’t really natural to me… trying to sell art is game and puzzle enough. I’d talk to someone if they had an idea, but the sweet spot in price/performance for what I do is pretty far above the amount of expense and complexity that game pieces can usually support.

FALSE MACHINE: People seem to not think about things that they use. If something is ‘useless’ it’s easier to get people to see the art in it, but when they use it, they don’t see it. Does this bother you?

GROSSMAN: Nah. The flip side is that people are much more willing to pay for something that can be seen as useful, even if the utility is very marginal to its artistic content.

The best of my bottle openers, the Klein bottle opener, works so nicely that I use it because it’s the only bottle opener that doesn’t hurt my hand. It’s a successful design as both art and gadget: either side can disappear, depending on whether you’re looking for an aesthetic experience or an open beer; and that’s reflected in its popularity. 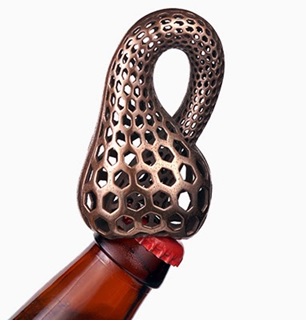 FALSE MACHINE: Game pieces are used, and this use forces constraints on their creation. You seem to create your own constraints and to deal with those presented by the technology you use. Do you think the creation or use of these constraints is necessary for good art?

GROSSMAN: When I figure out a way to make art that doesn’t have any constraints, I’ll try that and let you know.

FALSE MACHINE: Is there anything in the world of sculpture or art that you are really excited about and want people to know about?

GROSSMAN: I’m going to be uncharitable to many fantastic influences and colleagues, and say no… I feel absolutely unable to add to the enormous ongoing wave of media interest in 3DP art. I’m in an inward phase, and I’m currently very excited about a piece of corroded iron drainpipe that I found on a beach.