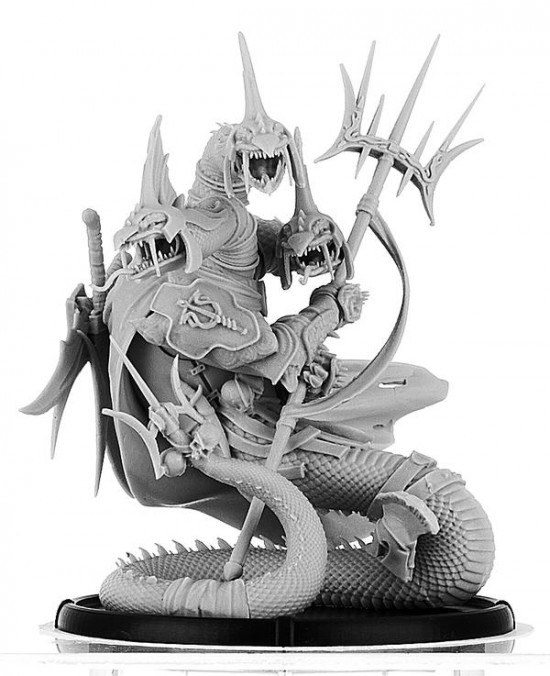 The mini pictured above is Thoth, Anax of Ýdron, created by Mierce Miniatures: concept by Robert Lane and Tim Fisher; artist Beth Hughes; sculptor Oliver Nkweti. I find it unusually pleasant and interesting to look at.

How does it produce the aesthetic effect that it does? Let’s investigate the following aspects of Thoth, Anax of Ýdron: shape, stuff, skulls, and character.

This mini is like a tsunami of movement; I have begun to think of it as the ‘wave hydra.’ The snakebody is a classic compressed ‘S’ shape. This brings in feelings of power and dynamism. We can only imagine Thoth moving one way: to expand, to attack.

The wave of the figure’s cloak is arranged so that the strong interrupting line of the staff strikes directly across it. The fluid curve leads your eye, then the staff cuts through — halving the wave.

The staff of the trident is the only straight line in the piece. Straps break its length, and from them hangs a fabric bow making a final, smaller curve — this one filling out exactly opposite to the mass of the figure as a whole. This final curve highlights, again, the length and straightness of the trident staff. 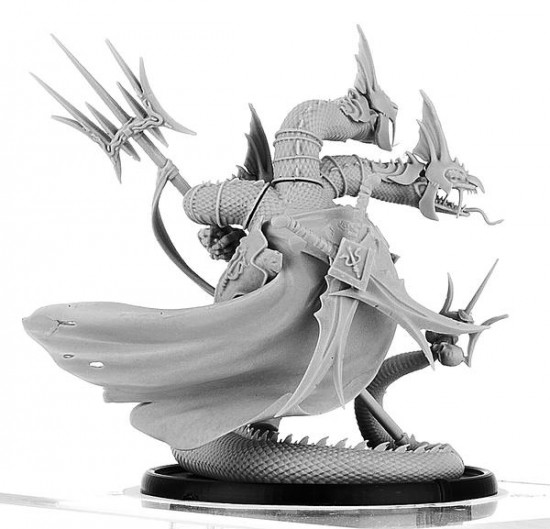 There is a ray of spikes haloing the model from left to right, from the tail-trident to the helmets of the three heads to the held trident of the weapon. The rule of three gets repeated three times across these spikes. Three spikes on the trident, three heads and another trident (this one actually has five, or even seven spikes but three are larger and more dominant.) We could argue that the tatters of the cloak make a final, fourth arrangement of three on the far lower left of the form, ending the halo in a wave of cloth.

So the mini goes:

You see and sense this all at once. Cuve-wave-strike-loop-and-spikes-haloing-everything.

None of these alone are super-original effects for a war-mini, but their collection and arrangement here is powerful and bold, they unify and react with each other well, leading your eye through and around the figure’s form.

Nerds like stuff. We glory in the poetry of things. A war-toy always has a lot of things, individual objects you can imagine taking off and treating separately on their own. 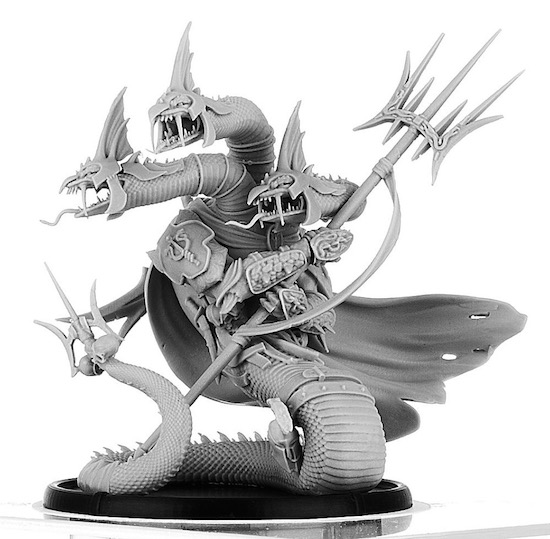 Counting from the tail of the mini to its head, here are all the individual things I see:

The helmet’s spikes are a little like crests and a little like waves, or sails. The waves return us to the sublimated sea-theme in the figure, never explicitly stated in its form.

The crests remind us of the lizard-like nature of the creature, but are also versions of the crests we might find on Greek or Roman helmets, and are also like the kind of ritually reproduced bodyform that humans put on armour… except, of course, this is for a race of intelligent lizards.

People put enhanced versions of their human musculature on breastplates, or enhanced humanoid faces of the front of helmets. By doing this they take symbols of strength, vividness and selfhood and reproduce them on the outside, isolating and projecting the energy. A real-life lizard person might have head crests that present in times of threat and the crests of the helmets could be enhanced versions of that in the same way the muscly-torso breastplate might be for a human being. The super-scales on the forearm guard might do the same kind of thing, extra-super scales.

The line of the alien flesh is continually being broken up by lines and straps. Could these be kinetic ‘greebles’ [special effects term for a fine detailing added to the surface of a model in order to make it more visually interesting], i.e., marks across a moving flexing surface made to draw the eye to the nature of its movement so that is can be more explicitly registered? None of the long things in this figure are unbroken by a line and commonly they are broken by more than one.

The straps around Thoth’s lower body make no practical sense; they would come off. But perhaps they make something useful in the shape, as part of the art, that they would not do in the real world.

When it comes to war-toys, the principle is a clear one: Add skulls. Not sure about a shape? Put a skull on it. Weapon not dangerous enough? Perhaps emboss with skulls. Worried about your skulls? Put skulls on your skulls; or in the case of Games Workshop, put an antigravity motor in your skull — so it can float around like a little familiar.

Skulls are cool, but why is a skull cool? Here are some possible reasons:

This is not enough to penetrate the mystery of the skull’s coolness, but we must move on.

The mini shown in this post is a snake around a staff: a Caduceus. Versions of this symbol are repeated again and again on its armour. The Caduceus was the symbol of Hermes, Greek god of (among other things) writing and magic. The Egyptian god of writing and magic was Thoth. In Hellenistic Egypt, the two gods were worshipped as one. So there you go.

Thoth, Anax of Ýdron, is a monster, but also a person. Animalistic and human-culture aspects are arranged in a dissonant but interesting pattern. 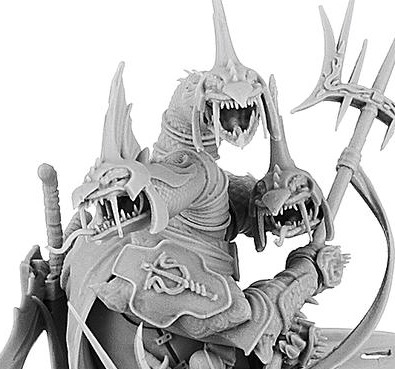 The face and shape of a more typical sci-fi/fantasy mini presents human-level information — story and character information is projected forwards — whole its strange weaponry nigh suggest inhuman or more physical information. Futuristic war-toys look most like people from the front, from behind they seem most abstract and alienated from organic forms. The 40k Space Marine’s face is a human face, but his weapons are more inhuman.

But with this guy, his (her?) face is deeply inhuman. The personality-based information is not in the mini’s face and shape, but in its objects. The most person-like aspect of Thoth is the way she is holding the trident, the cluster of shapes around the hands and staff making another yin-yang sign right under the heads. But Thoth’s heads are disturbing and monstrous — with no capacity for human emotional information.

So there is dissonance. The story information, the information that says ‘this is a person in a particular set of circumstances’ is not where we would expect it to be. So we ‘read’ this mini in an unexpected way — yet one that ultimately resolves as it should, with you knowing all the kinds of things you feel you should know. This mild dissonance, ultimately resolved into a comprehensible and useful form, is a common pattern for the toys of war.

I like violence — or at least the symbols of violence, I don’t want any actual violence to happen to me. I’m generally an easier sell for a mini that’s about to fuck something up and looks like it could kill me. Maybe I want to own things that could kill me in miniature form?

Maybe I take pleasure in the extremely wide range of information drawn from, of so many different kinds. Shape. Detail. Character. Use. All meshing together in ways it never could in a naturalistic sculpture, because the range of information would be limited, or in a more abstract sculpture, because the social and human-level stuff like the ‘story’ and the Greek helmets and the use wouldn’t be the same. I like my art to bring its world with it into mine, sometimes at least.

The great curiosity for me is the process of design. Five people interacted to produce this. How did they collaborate? Who brought what form and when? How did the design of an imagined race, and culture, and faction, and world combine? How does it match or mesh with the rules. How was the design brief given? Did anything change during the creation process? How was it manufactured and how do the tolerances and requirements of the mass production process impact the aesthetic effect?