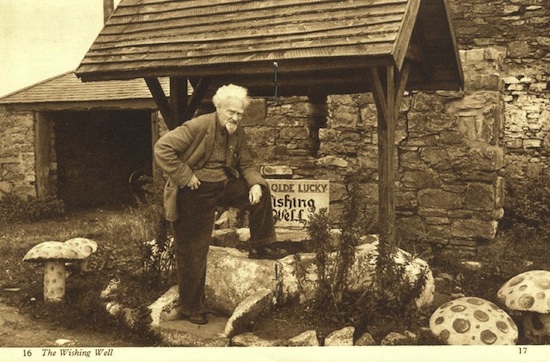 For a man who almost single-handedly invented the postwar religion of Wicca — a movement whose rituals feature knives, nudity, horned gods, and flagellation — GERALD GARDNER (1884–1964) was in some ways a rather conventional fellow. For decades he worked in the far-flung reaches of the British empire, and though he was fascinated with tribal magic and exotic weaponry — he was expert on the kris — he consistently played the dutiful colonialist administrator. He was a Tory and lifelong reader of the Daily Telegraph, and anxious enough about his social status to consistently fib about his fly-by-night academic degrees. And yet Gardner possessed a visionary sense for the fun and profit lurking in the “pagan” currents of British culture, with its middle-class occultists and rural cunning workers, its Folk-Lore Society and Wind in the Willows Romanticism. Inspired by the folklorist Margaret Murray’s influential but bunky The Witch-Cult in Western Europe (1921), which argued that witchcraft represents the lingering glow of pre-Christian fertility religion, Gardner transformed the figure of the witch into an avatar of counter-cultural values to come: goddess feminism, sacred sexuality, chthonic shadow work. Though he drew ideas from anthropology and existing occult orders like Rosicrucianism and Aleister Crowley’s OTO, Gardner’s concoction managed to rupture the stream of western esotericism, creating a separate space for newly “traditional” ways of identifying with nature, fertility, and the feral body. And though historians have argued that the New Forest coven that supposedly initiated him in 1939 was a recent invention, and that his Ye Bok of ye Art Magical was stuffed full of appropriated materials rather than archaic lore, the energy that Gardner’s creation released into the postwar world begs, as always, the larger question of how the gods authenticate themselves through the work of imagination, particularly when that imagination is charged with desiring bodies in ritual space.

On his or her birthday, HiLobrow irregularly pays tribute to one of our high-, low-, no-, or hilobrow heroes. Also born this date: Dorothy L. Sayers, Fernando Pessoa, William Butler Yeats, Basil Rathbone, Steve-O, Aby Warburg.