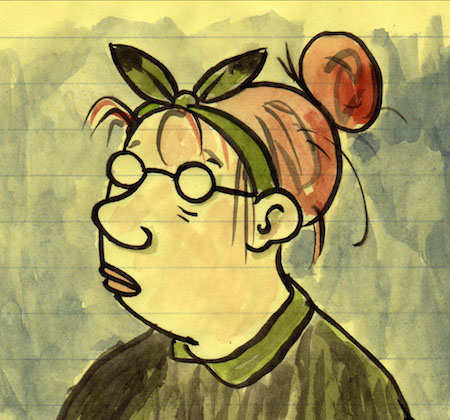 Every afternoon in the early ’90s, I walked to my job as a word processor on the evening shift at a downtown San Francisco law firm. If it was Wednesday, I’d stop and pick up copies of the local alternative weekly newspapers. That night, as I waited for the computer system to back up on big tape cartridges, I’d check which bands were coming to town and read Ernie Pook’s Comeek. Instantly recognizable among the rigid columns of personal ads by its four-panel format and playfully stippled and striped borders, LYNDA BARRY’S (born 1956) work featured not Ernie Pook, but teenager Maybonne Mullens, her Funky Chicken-dancing little sister Marlys, and their younger brother, Freddie. Filled with adolescent alienation and loneliness, not to mention bullying classmates and irrational adults, the stories might be devastatingly funny one week and bittersweet the next, or both at the same time. They were always told in the first person. The diary-like effect was enhanced by Barry’s hand-lettering and marginalia that always reminded me of the cool doodling that the older kids did when I was Marlys’s age: flower power and peace signs. Reading Ernie Pook and basking in the heat of the computer room, I never imagined that within twenty years both the alternative weekly and career word processing would be dead. Ernie Pook’s Comeek was collateral damage; by 2008, it appeared in only four weeklies, down from a syndicated high of 75, and Barry decided to end it. “When I stopped the strip I wondered what was going to happen with my characters,” she told an interviewer. “Then I realized… that they were free.”

On his or her birthday, HiLobrow irregularly pays tribute to one of our high-, low-, no-, or hilobrow heroes. Also born this date: John Hope Franklin, Isaac Asimov, Roger Miller, Todd Haynes.