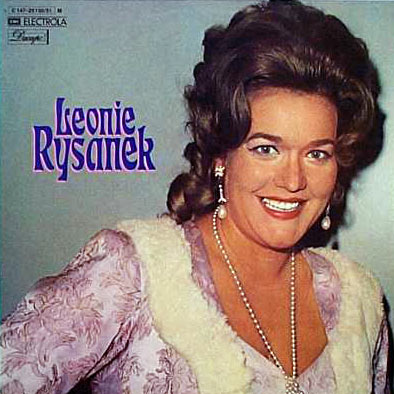 “She found in each of her impersonations,” wrote James McCourt of dramatic soprano LEONIE RYSANEK (1926–98), “a vein of melancholy, fatalistic, introspective truth and mined it in startling ways.” Born and attending conservatory in Vienna, Austria, Rysanek debuted in Innsbruck in 1949 as Agathe in Weber’s Der Freischütz. International notice came at the momentous 1951 Bayreuth Festival, as Sieglinde in Wagner’s Die Walküre, a role she’d record two years later under Wilhelm Furtwangler’s baton. Further European successes followed, including the Empress in Strauss’ extraordinary Die Frau Ohne Schatten. Rysanek’s American debut came in 1956 in San Francisco, as Senta in Die Fleigende Holländer and three years later, she was scheduled to make her Metropolitan Opera debut in Aida. Then, shortly before the February 5, 1959 opening of Macbeth, the Met fired its Lady Macbeth, Maria Callas, and named Rysanek her replacement. It was a triumph and Rysanek’s power, intensity, and endurance were beloved for decades. (There were critics, however. Reviewing Lohengrin in December 1985, John Rockwell decried Rysanek at “her camping-it-up worst, swirling her cape and clutching her fingers into claws, scooping and hooting and, at the very end, unleashing one of her patented and extremely annoying piercing wails.”) Rysanek made her farewell, as the Countess in Tchaikovsky’s Pique Dame, in 1996. A forty-minute ovation followed, the Met crowd chanting “Le-O-Nie! Le-O-Nie!” until she returned to the stage. “I would rather sing than speak,” she said. “I find the words difficult. It’s been 37 beautiful years, I love you all.”

On his or her birthday, HiLobrow irregularly pays tribute to one of our high-, low-, no-, or hilobrow heroes. Also born this date: William Steig, Louise Brooks, Constance Rourke, DJ Run.