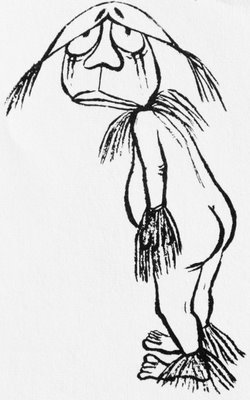 Perhaps the most prolific cartoonist ever for the high-middlebrow/nobrow New Yorker, and creator of the story that inspired the quatsch film Shrek, WILLIAM STEIG (1907-2003) might not seem an obvious hero for HiLobrow.com. Ladies and gentlemen of the jury, there are mitigating circumstances. As a child of socialist parents who didn’t want their children to be on either side of the business/labor exploitation dyad, Steig dreamed of being a hobo — and began drawing for the New Yorker to support his family during the Depression. His favorite “symbolicker” was William Blake. His doctor, the transgressive psychologist Wilhelm Reich, was an important influence: Steig owned an orgone energy accumulator, a device designed by Reich to transfer entropic orgasmic power to the accumulator’s occupant. Nor is it just his life that’s more highbrow (or hilobrow) than middlebrow. From the picture book Amos & Boris: “One night, in a phosphorescent sea, he marveled at the sight of some whales spouting luminous water; and later, lying on the deck of his boat gazing at the immense, starry sky, the tiny mouse Amos, a little speck of a living thing in the vast living universe, felt thoroughly akin to it all.” As you read this to your four-year-old at bedtime, imagine Steig writing it in his accumulator — his children’s literature is notable for its combination of precise sentence structure and earnest explorations of the numinous. Quatsch can’t touch this.