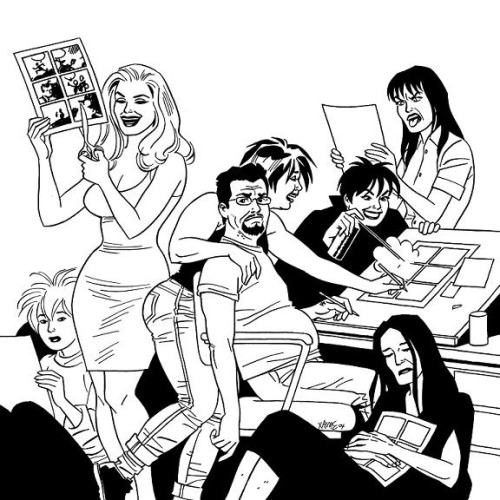 In 1988, while unwrapping a care package sent to the University of Connecticut from Laredo, Texas, I was ambushed by three older professors of English Lit. I was an assistant professor; my mother had sent me a bundle of homemade flour tortillas. “Why did you kick King Lear off the ‘masterworks’ reading list?” they wanted to know. “Who gave you permission to teach comics?” Most urgently, they wanted to know who the hell JAIME HERNANDEZ (born 1959) was. Like Robert Crumb and Art Spiegelman had in the ’60s and ’70s, I tried to explain, talents like Daniel Clowes, Lynda Barry, Charles Burns, and Los Bros. Hernandez (Jaime and his brothers Gilbert and Mario) were telling stories — for adults, not kids — in an exciting new way… and pioneering an “alternative comics” revolution in the bargain. I was particularly taken with the way Jaime etched the realities of West Coast Latinas/os, loving and living large in Chicana/o-dominated barrios, with clean-lined, india ink-borne graphic magic. By 2004, when Fantagraphics released the 712-page opus Locas: The Maggie and Hopey Stories (now sadly out of print), it was no longer necessary to argue that Hernandez is a visionary American original. Back then, however, it was; and I did. Even though doing so meant temporarily missing out on my mom’s tortillas.

On his or her birthday, HiLobrow irregularly pays tribute to one of our high-, low-, no-, or hilobrow heroes. Also born this date: Thelonious Monk, Ed Wood, Giant Haystacks.