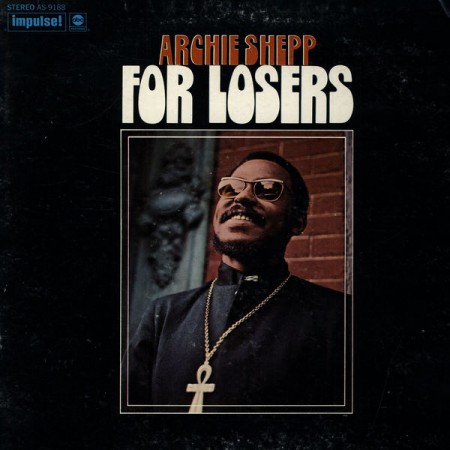 “The Negro musician’s purpose,” ARCHIE SHEPP (born 1937) told LeRoi Jones in 1965, “ought to be to liberate America aesthetically and socially from its inhumanity.” A tall order but one the ambitious Philadelphian was prepared to effect, having studied piano, clarinet, and saxophone in his youth and drama at Goddard College. Moving to New York after his 1959 graduation, Shepp found the bandstand more welcoming than the stage, though it was activist work with black journalist Calvin Hicks’s On Guard Committee for Freedom that first garnered him public notice and controversy. Though he floundered some as a Cecil Taylor sideman in 1960–61, subsequent collaborations with visionary trumpeter/composer Bill Dixon and the co-operative New York Contemporary Five produced sounds of great subtlety, wit, and power. Shepp’s solo debut Four for Trane (1964) comprised three John Coltrane tunes and the brilliant original, “Rufus (Swung, his face at last to the wind, then his neck snapped).” Further provocative combinations of text and concept featured on all Shepp’s albums through 1972’s big band oratorio-like masterpieces Attica Blues and The Cry of My People. While his music flourished, Shepp kept writing. In January 1967, Junebug Graduates Tonight! opened Off-Broadway with the great Moses Gunn among its cast and in February 1972, Brooklyn College’s Afro-American Theater Workshop presented three Shepp plays: Fanfare For A Revolution; the prison drama 69; and Skulls, “a farce,” explained director M. Anthony Watson, “set in both Harlem and the south, about a white man who controls Blacks with religion and drugs.”

On his or her birthday, HiLobrow irregularly pays tribute to one of our high-, low-, no-, or hilobrow heroes. Also born this date: Bob Dylan, Lillian Gilbreth.