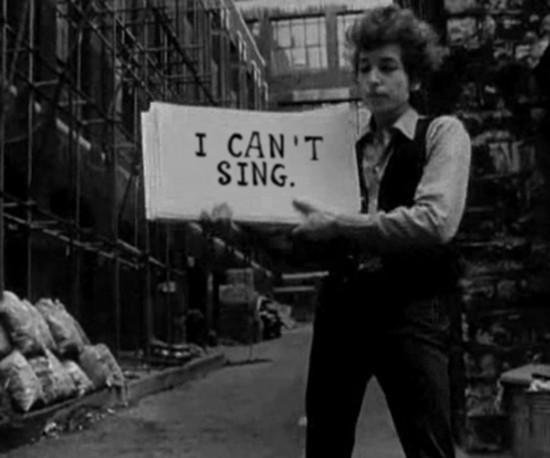 Robert Zimmerman, alias BOB DYLAN (1941), was a master shapeshifter well before Lady Gaga, or even Madonna, safely repackaged reinvention. In Dylan’s talking blues, détourned ballads, raw guitar noodlings, and psychedelic rambles he played the wandering troubadour, trailing verse in sinuous songlines over the horizon. But he always insisted on plausible deniability — he became folk music, and then proceeded to prove it out of existence. Famously going electric during the heart of the folk revival, he was unphased — music and storytelling, like all the arts, are created and performed, not by the folk, but by individual weirdos. Who will do as they individually damn well please. Dylan has managed to irritate almost everyone with the hairpin curves in his oeuvre, from folk to electric to pop superstardom to recluse to finding his religion to losing it to finding it again, from painfully ironic movie star (“Alias Anything,” anyone?) to a voice that started out thin and went downhill from there — it seemed he must be bent on snatching defeat from the jaws of victory. Except that defeat has never truly been his. Through it all, he moved poetry from the sidelines to the spotlight. From the poignancy of a single broken heart, to the reanimation of a thousand-tongued phrase, from nonsense rhymes to social commentary, from god and man and back again, he sang us the living, vibrating hearts of words, as universal and individual as any one of us. Periodically some young turk is touted as “the next new Bob Dylan,” always to find the title already taken — by Dylan himself.