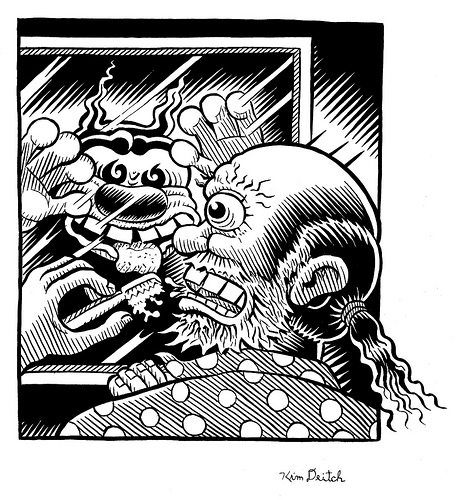 Since the Sixties, the underground cartoonist KIM DEITCH (born 1944) has created a body of work straddling the fuzzy territory between comics and cartoons. His father, Gene Deitch, was an essential artist from animation’s Golden Age; the son’s printed work has always had more than a flavor of animated madness. The most obvious hat-tip to cartooning is Deitch’s long-running character Waldo the Cat, a trickster figure inspired by — but transcending — any number of blackened rubbery animals populating the cartoon medium during the Twenties and Thirties. There is a grinning mania to Deitch’s line work, a psychotic happiness that can come across as far more disturbing than R. Crumb’s squiggling myopia or Spain Rodriguez’s scratchy violence. In a way that at times calls to mind Max Fleischer or Maurice Sendak, Deitch pulls off that most difficult of tricks: His comics are at once reassuring and disturbing. Growing up, I was introduced to Deitch’s work via the bumpers he did for (the then-much-riskier) Nickelodeon cable network; the medium did not obscure his cheery, devil-may-care message about the horror that faces us all daily: “We are all alone, kids. You might as well smile about it.”

On his or her birthday, HiLobrow irregularly pays tribute to one of our high-, low-, no-, or hilobrow heroes. Also born this date: Fats Waller, Notorious B.I.G., Henri Rousseau, Robert Creeley.