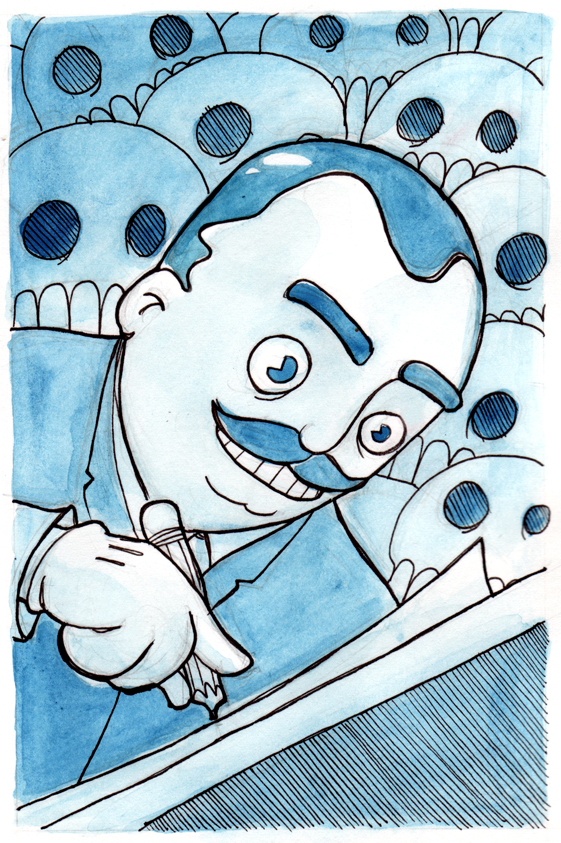 Though mostly known for the success of the freakishly-proportioned Betty Boop, MAX FLEISCHER (1883–1972) can be regarded as the anti-Disney. Drawing from the long and storied Eastern European tradition of darkly comic graphic creations, the Polish Fleischer produced cartoons and comic strips that depicted urban America as it was in the early part of the 20th century. Instead of the sanitized domesticity of Walt’s forced vision, Fleischer’s dirty (really! check out his cartoons, they have litter!), crowded, jazz-filled hooch-bars, tenements, and dark caves played to the looming sense of foreboding hovering over world politics and in the deeply disadvantaged and racially torn streets. With the creation (and patenting) of the rotoscope, Fleischer’s vision was complete: the eerily accurate movements of his nearly manic, bright-eyed characters were a particular type of demented parody of Walt’s brainless vessels for the dominant culture, his characters a grim carnival parade of ugly truth. He offered the conceptual foundation for what could be called the blossoming countercultural whimsy market, and respected artists for a century afterward — R. Crumb, Kim Deitch, Ralph Bakshi, and dozens of graffiti artists — would all try to recapture his skewed, cynical vision.