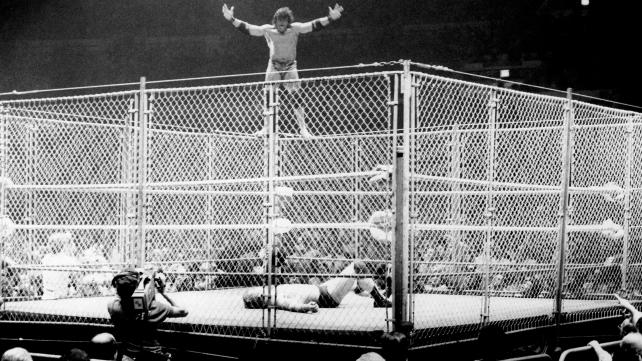 JIMMY “SUPERFLY” SNUKA (James William Reihe, born 1943) caused more broken collarbones, sprained wrists, dislocated elbows, and traumatic brain injuries in the 1980s than Henry Rollins, and in June 1982 — when he was tapped to face champion Bob Backlund in a cage match — he was the most popular heel in the WWF. The match went back and forth for 10 minutes but was reaching a climax. Jimmy had pounded, head-butted, and subdued Backlund and was climbing up the cage, all the way up. As Jimmy stood on the top of that cage, everything seemed attainable. When he leaped, every 12-year-old boy in America held their breath, and as Jimmy hung in the air, it seemed for a moment that every single stupid idea that we’d had was possible — that there really was something edifying in the truly, dangerously foolish. There’s a Greek myth about Sisyphus, doomed to push a boulder up a hill, forever; I like to picture Sisyphus posed — triumphantly, heroically, like Superfly Snuka at the very top of the cage — for a split second, before the boulder rolls down again. Backlund scurried away, Jimmy (who was, after all, the heel) crashed to the mat… and that’s when we realized that nothing was possible in Reagan’s America, and that the Eighties were going to be just the worst.

On his or her birthday, HiLobrow irregularly pays tribute to one of our high-, low-, no-, or hilobrow heroes. Also born this date: Mark Mothersbaugh, Chow Yun Fat, Ai Weiwei, Tina Fey.