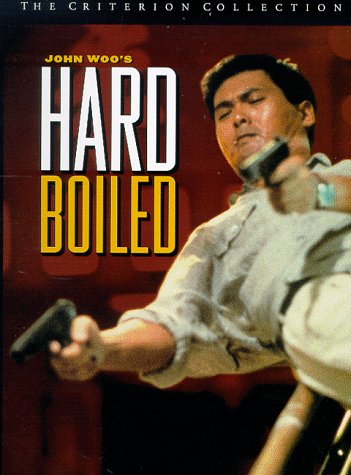 Although American production companies seem determined to fit CHOW YUN-FAT (born 1955) into the Asian male role readily to hand — martial arts hero (Bulletproof Monk, Crouching Tiger, Hidden Dragon, or … Dragonball Evolution) — in his most successful work he more closely approximates that icon of pulp American masculinity, Clint Eastwood. If the central female role of American pulp film is the hooker with the heart of gold, its male counterpart must be the noble killer; and Chow Yun-fat is its apotheosis. Preternaturally handsome and impeccably dressed, Chow habitually plays a hired killer or a renegade cop who might seem like a hired killer if you entered the movie late. The ur-text of the classic John Woo/Chow Yun-fat picture includes 20 minutes or so setting up the cause of the righteous indignation that will drive Chow to kill upwards of 100 people before the movie is done. Dead partner, distant family at risk, even a mistakenly-blinded lounge singer can be enough to get Chow killing again. He enjoys shooting his two eternally-loaded pistols with his body at rakish angles (as above) — launching sideways through internal hospital windows (often), launching sideways across or over tables (often), launching forward out of a sliding morgue gurney, sliding along the floor on his side, back or stomach. Unlike Eastwood or Bronson (another icon of the type), Chow can convey softness and grace through that remarkable face. This is best seen in the climactic scene of Hard-Boiled in which the bad guys are holed up in a hospital, surrounded by police, with Chow and Tony Leung and a handful of other police trying to evacuate the hospital. The kingpin is determined to kill helpless patients and, particularly, the babies in the nursery for no particular reason. After putting cotton wool in the babies’ ears to protect them from the noise, Chow shoots his way through the hospital holding the last baby in his non-shooting arm, singing it a song between killing thugs, then stops to wipe someone’s blood gently off its face before jumping out the window holding onto a live wire, clothes aflame. And all without any ironic quips. Take that, John McClane.