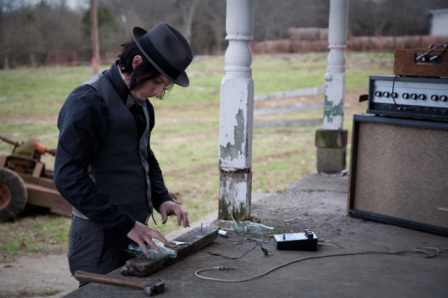 The White Stripes hit college radio when it needed salvation from too much alt-country. JACK WHITE’s (John Gillis, born 1975) stern, fully tilted guitar with the courtesy of production quality ripped a hole in indie music’s bent-over-a-bar bad posture. Despite having won many Grammy Awards and having landed on Rolling Stone’s “100 Greatest Guitarists of All Time” list, these days Ambassador of Nashville White still gets his hands dirty. His project Third Man Records finds and revives roots-rock attitude with more analog philosophy. He runs from group to group (Raconteurs, Dead Weather) and duets with everyone from Alicia Keys to Loretta Lynn and Wanda Jackson. His lyrics are thoughtful, dense, suspended monuments. His cover tunes are fearless: Dolly Parton’s “Jolene,” for example, on which White chases down the desperation as he pulls the expensive hair of his shitty guitar. But the best thing about Jack White? He doesn’t do anything just because he can. He’s a less-is-more minimalist, who learned from listening to Son House — at age 18 — how much you can do just singing and clapping.

On his or her birthday, HiLobrow irregularly pays tribute to one of our high-, low-, no-, or hilobrow heroes. Also born this date: Franz Boas, Mervyn Peake, Basil Wolverton.