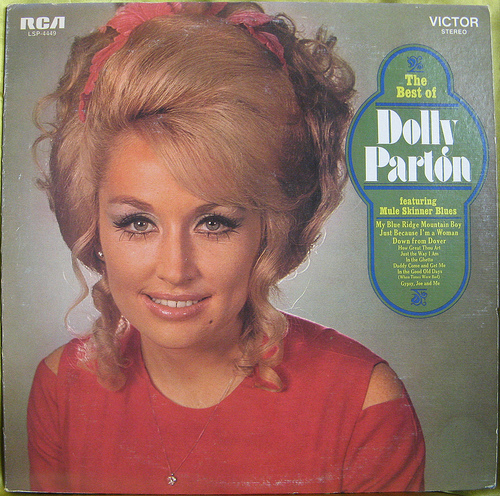 Forget the breasts, the wigs, and, recently, the plastic surgery. Consider instead DOLLY PARTON (born 1946), the fourth of twelve children from a farming family in Locust Ridge, Tenn., as she arrives in Nashville, 1964. The reigning queens of country are Loretta Lynn, Norma Jean, and newcomer Connie Smith; great singers all, though only Loretta writes. Dolly wrote too, and by ’67, the 21-year-old’s songs were covered, including by Skeeter Davis (“Fuel To The Flame”); and her debut album, Hello, I’m Dolly, reached #11 on the country charts. That year, Dolly replaced Norma Jean as the “girl singer” on Porter Wagoner’s TV show. The duo’s legacy: a couple dozen of the greatest country duets ever, and nearly all of Dolly’s finest solo albums, including those with such self-penned standards as “Traveling Man,” “Coat of Many Colors,” “Jolene,” and “I Will Always Love You.” After 1974, Dolly had nowhere to go but pop, and if her music suffered, her persona of paradoxes (feminist yet traditional, sexual yet restrained, sentimental yet irreverent) thrived. Even her pop songs had their moments. Try to deny the Parton/Rogers cover of the Bee Gees’ “Islands In The Stream”: it can’t be done!