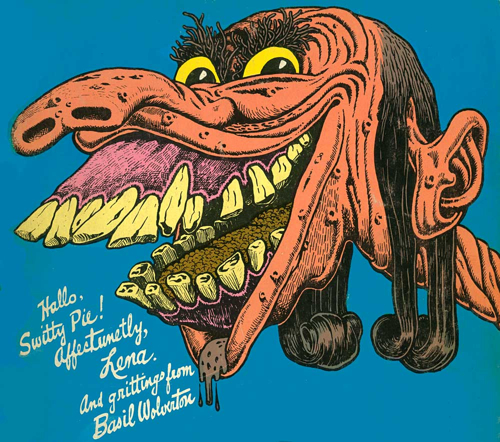 There is a nausea-inducing vertigo that arises when you contemplate some the great comic illustrators of the mid-20th century. These truly twisted minds are so far outside of our current mainstream (let alone their own gray-flannel era) that their manic art seems but a paper-thin exterior skin hiding a deeply rooted, sometimes scary repression. As with Jack Cole, the delirious expressionism of BASIL WOLVERTON’S (1909-78) art is more appreciated today than it was in his time; it’s easy to imagine Wolverton releasing his obsessive art as, say, a limited-run Drawn & Quarterly chapbook. Wolverton was one of the pioneers who made today’s highbrow comics scene what it is; his twisted abstract portraiture, all sweatbeads and pleading eyes, floated like a buoy in a sea of banal comic art, influencing kindred spirits like Robert Williams and Big Daddy Roth. Though best known for his nightmare caricatures in the vein of Lena Hyena [pictured above], his sf and horror work — jewels like the Brain Bats of Venus — is equally disturbing (or invigorating). God knows what brain bat attached itself to Wolverton’s fertile grey matter, but it certainly wasn’t of this atmosphere.

On his or her birthday, HiLobrow irregularly pays tribute to one of our high-, low-, no-, or hilobrow heroes. Also born this date: Franz Boas and Mervyn Peake.