Regression Toward the Zine (3)

PREVIOUSLY: Proto-fanzines; and fanzines from the 1920s–30s
*

There are far too many 1940s–’60s fanzines to mention. I will just make a few notes:

* Beginning in 1937, science fiction fans formed amateur press associations (APAs); the members contribute to a collective assemblage or bundle that contains contributions from all of them, called apazines. The term fanzine was coined by Russ Chauvenet in the October 1940 edition of his fanzine Detours. 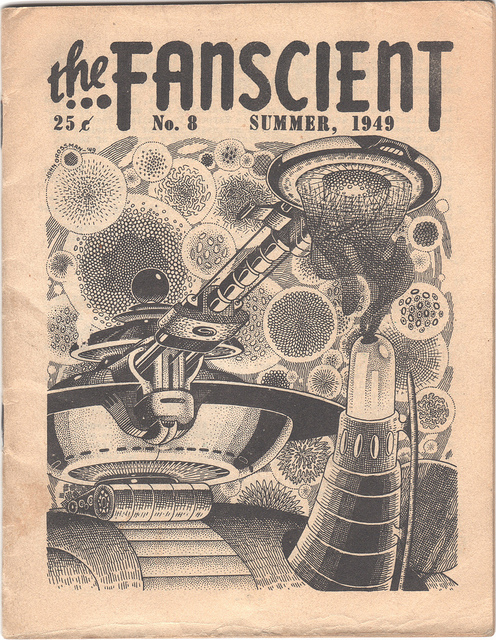 * H.P. Lovecraft died in 1937, and such was his force of personality within fanzine culture that fanzines dedicated to Lovecraft and what came to be called the Cthulhu Mythos appeared in the 1940s: e.g., The Acolyte, Cthulhu.

* The mission statement of the small-press poetry zine Different: “Different was founded as a sincere attempt to use whatever influence we might attain to salvage some last remnants of American culture and to restore within the limits of that influence some of the lost glory of the poetry of earth. For poetry, as we have said before, is the atomic energy of the soul, which exploded against the battlements of hate and terror will level them in the dust of oblivion and leave the liberated soul free in an expanding universe.” Nice! 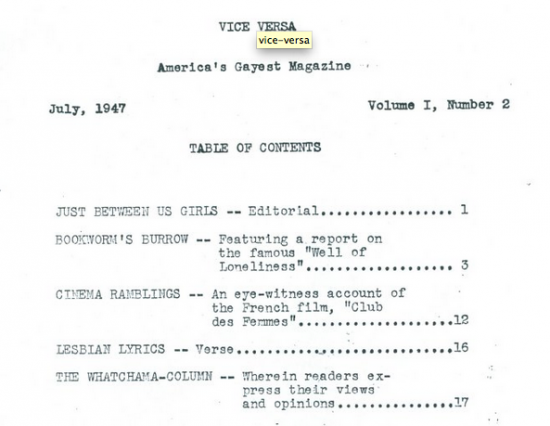 * A key figure of the 1940s fanzine world was Eydthe Eyde, a member of the Los Angeles Science Fiction Society better known as Tigrina. In June 1947, Eyde published the first issue of Vice Versa, supposedly the first lesbian periodical. She typed each issue while at work as a secretary at RKO Studios using a carbon paper to make four copies, and then repeating the process to create 10 copies of each issue. (When she learned it was illegal in the U.S.A. to mail any material about gays or lesbians, she delivered the zine by hand to readers.) Tigrina was also involved in the LA occult scene, and released a fanzine with the unimprovable — and very 1990s — title Hymn To Satan.

* In 1949, Xerox Corporation introduced the first xerographic copier called the Model A. Xerox became so successful that photocopying came to be popularly known as “xeroxing.” 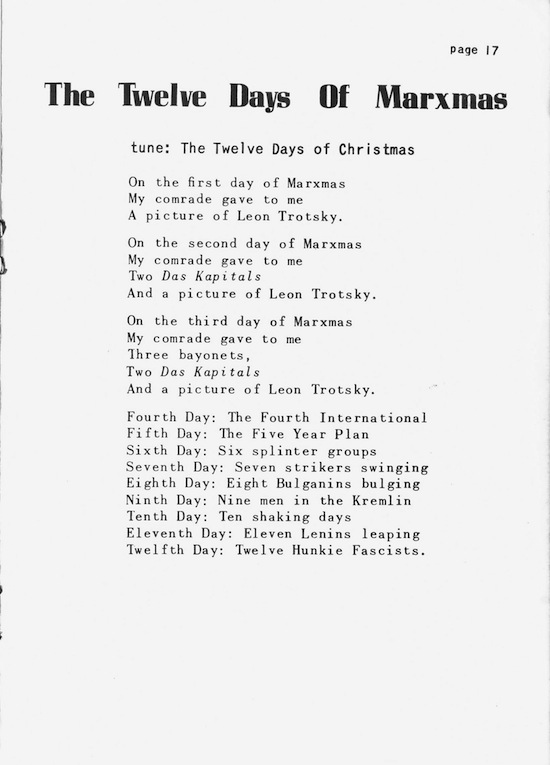 * Folk music fanzines — like Caravan and Gardyloo — emerged in the 1950s. The Bosses’ Songbook, for example, is a satirical one-off publication by Dave Van Ronk and Richard Ellington. The zine consisted of satirical reworkings of traditional songs, particularly folks songs, so that “This Land Is Our Land” became “This Land Is Their Land”, and “When Johnny Comes Marching Home Again”, became “When Johnny Comes Hobbling Home Again”, and “The Twelve Days of Christmas” became “The Twelve Days of Marxmas”. Richard Ellington was a member of the IWW, as well as a science fiction fan who also released the SF fanzines Fijagh and Metrofan. (There you have it: direct evidence that all other zines emerged out of sf fanzine culture.) Dave Van Ronk was a well known folk singer of the 1950s. 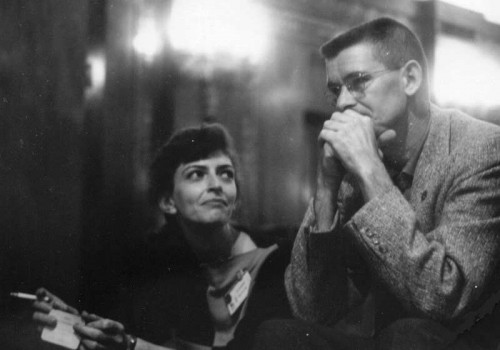 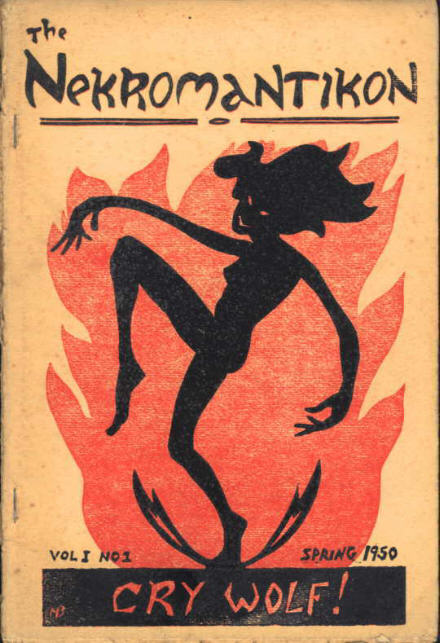 * In the ’50s there were fanzines dedicated to EC Comics and MAD. How cool is that? If anyone wants to send me a copy of Potrzebie or Hoo-Hah!, I’d be thrilled.

* Robert Crumb published a fanzine, and contributed to many. 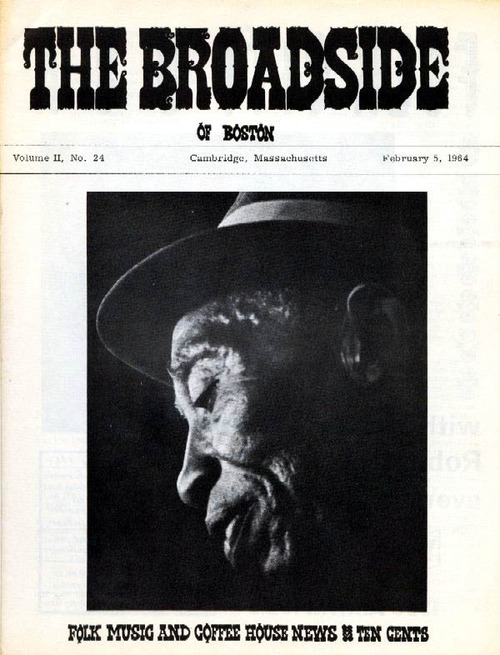 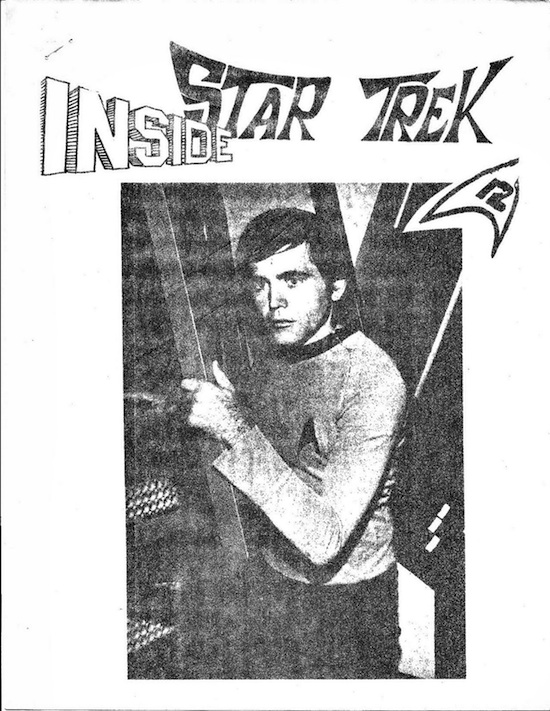 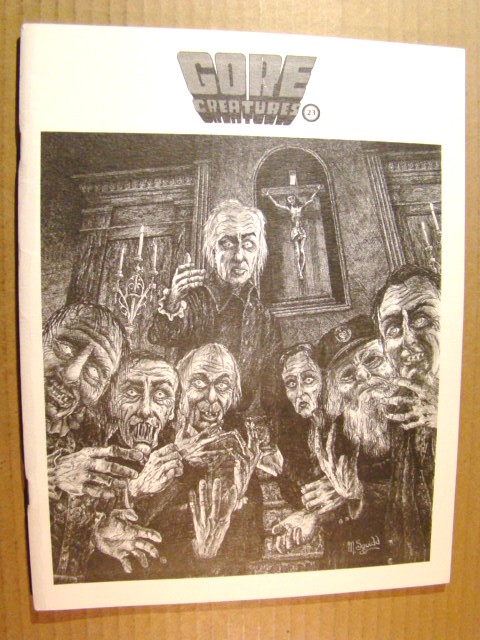 * The 1960s also saw the rise of horror movie fanzines — like Trumpet, Horrors of the Screen, Castle of Frankenstein, Gore Creatures. These are not to be confused with fan magazines like Forrest J Ackerman’s Famous Monsters of Filmland. 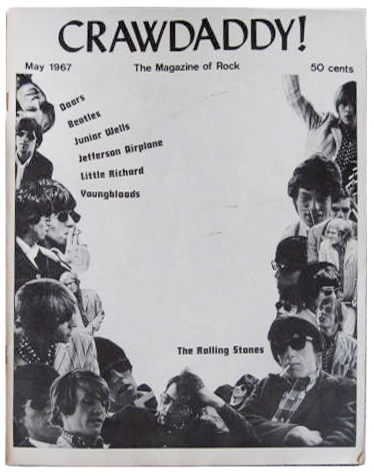 * One other notable emergent zine genre from the ’60s: rock’n’roll fanzines. Paul Williams’s Crawdaddy! is the most notable, though it quickly developed into an actual rock magazine. From the A.V. Club’s obituary for Williams, who died this year:

In 1966, when Williams was 17 and enrolled for his freshman (and, as it turned out, only) year at Swarthmore College, he began writing about rock music. Stapling the mimeographed pages together, and christening the results with a name taken from the London club that had hosted the Rolling Stones’ first gig, he began passing out copies of Crawdaddy! on campus. In those early, innocent days, he had the inspiration to track down mailing addresses for some of his favorite artists—like Bob Dylan—and send them sample copies. This, in turn, led to them volunteering to sit for interviews, which ultimately made it possible for Crawdaddy! to obtain national distribution and for Williams to turn pro in a field that he’d all but invented. Crawdaddy!, in fact, beat Jann Wenner and Rolling Stone to the newstands by a year and a half.

Crawdaddy! would go on to break other new writers who would similarly play a major role in the development of rock writing—and even rock music itself—in the late ’60s and early ’70s. Some these included the iconoclastic Richard Meltzer, Jon Landau (who went from profiling Bruce Springsteen, an artist that Crawdaddy! championed before anyone, to co-producing his records), and Sandy Pearlman, who went on to manage Blue Oyster Cult and produce the first U. S. release by The Clash.

* Another fanzine, Bomp, gave a start to such rock writers as Lester Bangs, Greil Marcus, Dave Marsh, and R. Meltzer.

NEXT: Punk fanzines from the 1970s