Here is the first-runner up from our fanfiction contest: An untitled Scooby-Doo fanfiction by classics major Jason Matthews (of Halifax, Nova Scotia), which we’ve titled “Mystery Machine.” 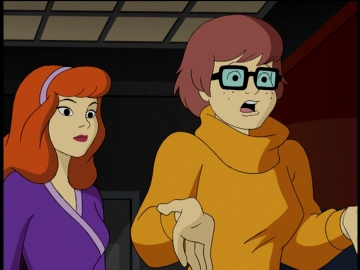 She could be tasted before she was seen, a vein of lilac at the back of the throat.

“I know you’re there, Daphne.”

“What happened to your room?” Velma took stock of her intruder. Just as bodily fluids glow under black light, motel light found prehistory in this face, baring its middens and barrows against a lunar halo. “I’ve been at the library since eight this morning. Could you please clear a spot so I can sit down?” Her eyes were the colour of the lampshades.

Velma gathered her books from the bed, folded the map unevenly, and shoved aside the pizza box, spilling its contents. There were crumbs in her hair, and her fingers were stained with highlighter. Daphne leaned forward to scrutinize an ugly biblical scene on the wall. Desert and robed figures; generations of anxious bed smoking enlarged the desert.

“Why aren’t you swapping ascots with Freddy? Ghost lights trump submarine races as a spectator sport.”

“The boys are staking out the old fertilizer plant. We’ll be joining them soon with the Marfa Sheriff’s department.” She produced a Xerox from her purse. “Here’s a signed statement from the owner of Venice Beach Taxidermy. His name is Venice Beach, the place is in Reseda. Anyways, I sent him pictures of the Chupacabra corpse, and he recognized it as a colleague’s work. A superstar taxidermist, as it turns out. Admitted to working on a hush-hush project for private donors before disappearing three months ago. The date matches up, give or take a long weekend, with the first cryptid sighting along the border just south of here.” Her excitement made the room uncomfortably small. “It’s too bad we didn’t get to take a tissue sample. I’m pretty sure it was a coyote with a modified chimp skull, but it would be nice to know for sure. The blasting cap we found was Mexican, and similar specimens were connected to a spate of cartel bombings in Monterrey. You don’t look very interested.”

“You don’t seem very interested in the case. What have you been up to for the last three days, anyways? It’s a nice change, being the substitute Velma, but I don’t much appreciate it when my teammates slack off.”

“You think you’re quite a sleuth, but our work is bigger than these little conspiracies. I figured I’d let you have your photo taken with all the dope on the table, and do some real work.”

“Real work? Excuse me? I’ve been following leads, buttering up nerds, cataloguing evidence, I bought this coat. What is more important than investigation? We’re detectives.”

Velma sighed. “Doesn’t it seem the least bit suspicious to you that so many different people, from every walk of life, representing every state in the union but South Dakota, would decide, more or less independently, to perpetrate the very same crime? Greed and superstition are constants, but why do they manifest in this particular way? What are the common denominators? The more I think about it, the more it resembles some kind of mass psychosis, except a disease, even a mental disease, follows a recognizable pattern. We are the only common thread, Daphne. Doesn’t that disturb you?”

“We are at the heart of the mystery, the real mystery.” Velma got up, and pulled out a handful of folders. “We never offer much thought to the masks the fraudsters use. They’re arbitrary, a means to an end. What if they aren’t” What if they are the point, and crime is just the medium through which they’re communicated?” She laid out a packet of cards. Each bore a character, rendered in vaguely Arts and Crafts style. It was a tarot deck of monsters. “If we are the intended audience, then the disguises must be symbols, together constituting a coded message.” She shuffled the deck, pausing to admire the barnacle encrusted scrollwork surrounding Redbeard the Pirate. “If they are symbols, then we must determine how to read them. Through what system, what language. I’ve considered them as compound elementals: Captain Cutler is water-air, the Space Kook is air-air, the Hawaiian Witchdoctor is earth-fire, and so on. I’ve explored their mythological and folkloric antecedents, read up on the occult from Babylon to Crowley. Their geographic distribution is described here —”

“Stop. Please stop. Cops don’t solve crimes by casting runes, Velma. Magical thinking is what the crooks are relying on. Now if you’ll excuse me, I have some smack pushers to bust.” Daphne stood, dusting her coat off disdainfully, and marched out of the room.

“You don’t understand!” Velma yelled after her, “‘Musterion’ is Ancient Greek for ‘a secret rite.’ We’re being guided, initiated into a higher state! Fed through a mystery machine!”