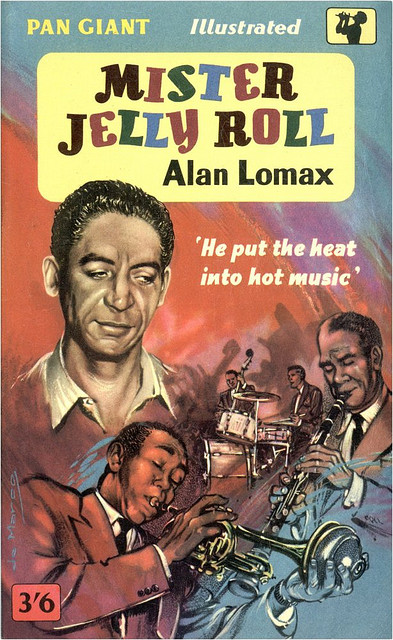 In May 1938, in an auditorium at the Library of Congress ALAN LOMAX (1915–2002), a portable battery-powered Presto acetate disc recorder at the ready, sat with Ferdinand “Jelly Roll” Morton to document the great musician’s life in sound. Though both men currently resided in Washington D.C., each had traveled far to get here. Lomax was an Austin, Texas native who’d earned his philosophy degree from the University there in 1936. Afterwards, as Assistant in Charge of the Archive of Folk Song at the Library of Congress, he’d continue the labors begun with his father John, Zora Neale Hurston and others: the preservation and dissemination of oral culture. Jelly Roll Morton of New Orleans was no ordinary folk: from brothels to minstrel shows to recording studios, Morton was a self-made genius (Charles Ives was his only coequal among early 20th-century American composers) who’d lost nearly everything to the whims of fashion, music industry rapaciousness, ill-health. Now, at least, Morton could tell his story straight. “His diamond studded grin lit up the sombre hall as he feathered his barrel-house rhythms out of the concert grand,” Lomax recalled. “’You hear that riff,’ he said, ‘They call that swing today. Yeah I guess that riff’s so old it’s got whiskers on it. Whatever those guys play today they’re playing Jelly Roll.'” Later, Morton played “C’etait N’aut’ Can-Can Payez Donc” in both the original and in what translation Creole mysteries allow:

On his or her birthday, HiLobrow irregularly pays tribute to one of our high-, low-, no-, or hilobrow heroes. Also born this date: John Lydon, Carol Channing, Grant Morrison and Derek Jarman.