Erik Davis, author of Techgnosis, Nomad Codes, [Led Zeppelin IV], and Visionary State, is a friend of HiLobrow. He is also a contributor: His 2010 “Pop Arcana” column for us on the Cute Cthulhu meme remains one of our most popular posts. We’re thrilled to publish ten of Davis’s essays which first appeared elsewhere; this is the fourth installment in the Nomadbrow series.

This piece was written in late 2009. Happily, the PhD has been so far worth the horror of the following.

For reasons that remain obscure even to myself, I have decided to apply to a PhD program this winter, which means that I was recently forced to submit myself to the joys of the Graduate Record Examination. I have always hated standardized testing, and my hatred has not abated in the twenty years since I last took the test — decades in which I have built a wayward and sometimes scholarly career whose appeal (and lack of remuneration) has a lot to do with the avoidance of institutional bullshit. In fact, the specter of having to bow down before the GRE — not so much the task itself as what it symbolizes — has inspired such revulsion that it has, until now, significantly contributed to my resistance to applying to graduate school.

When I made the appointment online, I noted that it was possible to reschedule “up to three days” before the test. On a Monday, I realized that it was going to be a pain in the ass to take the test I had scheduled for Thursday. After the requisite fifteen minutes of digging out the right phone number from the nest of interlocking ETS web pages, I discovered that their fine print stipulated that the three days in question did not include the day of the test or the day the request for rescheduling was made. In other words: five days. The galley slave I spoke to on the phone was cold and uncaring: I either took the test on Thursday or was out $150, already a kind of highway robbery. 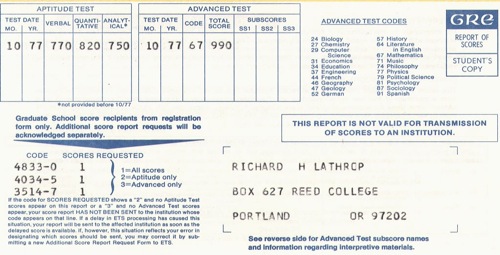 My life has been kind of a drag lately, so ETS’ avaricious bit of nit-pickery — so like the stupid puzzles that litter their tests — loudly confirmed that the meaningless voids and broken glass in my heart were well synced with the real world. Such bleak sobriety has its own gifts, of course, and one was the sudden change of heart I mustered about the Thursday exam I was now more or less compelled to take. From revulsion I had passed to a strange enthusiasm. I am not talking about the devil-may-care grin of the insouciant foot-soldier, or the cool calculation of the poker player with his eye on the prize. Instead I found myself looking forward to the exam as a transformative opportunity in itself: an exercise in active nihilism, a pure celebration of America’s atrocious banality, and a spiritual sacrifice to the corrupt paper-shuffling priest-class of the institutional mind.

I was not disappointed. The testing facility was on the first floor of some bland office park in South San Francisco, near various data storage centers and digital security outfits. On time for my 8 am appointment, I waited at the front desk for a spell before a sour fellow with an impressive beard and alcohol on his breath greeted me with a rapid procedural patter whose ironic and diffident tone not only communicated his total lack of interest or investment in my personal well-being, but also served as an initiatory blast of the bitterness that would pervade the morning like the penumbra of booze that shadowed this functionary’s gnarled soul.

I showed him my ID, and signed off on some stipulations, including the promise that I not speak with anyone present. I was asked to empty all my stuff — watches, wallet, etc. — into a locker, and wait in silence. A sign informed me that the entire facility was being audio recorded and video-taped. Almost an hour later, Mr. Beard summoned me to his desk, where I was given more instructions and photographed. I was not required to use the fingerprint scanner that was presumably employed for loftier exams. Then I was shown to the solitary cubicle where I faced a screen alone. All this claustrophobic ritual suggested that the GRE is the intellectual equivalent of passing through airport security: an apparatus of institutional judgment, mindlessly administered by louts, and featuring symbolic humiliations, surveillance, and an unspoken presumption of criminality.

Given that the test was extraordinarily unlikely to make a difference to my application, I would like to tell you that I had followed through on an earlier vow and not prepared for the test at all. Given my interest in useless humanities, the quantitative portion was effectively pointless. Nonetheless, I was once a pretty decent math buff, and my pride could not allow myself to face a family reunion with completely forgotten theorems, rules, and algebraic procedures cold. I studied the quantitative section haphazardly for a few days before, which allowed me to get exactly the same score on the quantitative I first got on my GREs twenty years ago. Of course, the meaning of that percentile has plummeted in today’s era of inflated if standardized smarts, when 800s on the quantitative are now routine.

This, I discovered, was not the only difference between today’s test and the exams of yore, whose immense irritations took on a rosy glow from the perspective of my soulless cubicle in South San Francisco. In the old days, kiddies, the exam was a collective operation, a group hazing process that forged an esprit de corps despite the competitive bite of the rankings. Today, of course, the text is perfectly isolating: one sits before a computer monitor and begins the test at one’s own time. Instead of a human being describing the testing procedures, the software itself teaches you, somewhat lamely, about its routines. Waves of nostalgia for things that were stupid in the first place overcame me — a sign that the GRE’s ritual of the abject was achieving the desired effect. My heart became an empty little circle, yearning to be filled in with a number 2 pencil that would now no longer come.

The GRE’s other major change was the replacement of the earlier logic section — which I excelled at and enjoyed far more than I enjoy, say, crossword puzzles or sudoku — with essays that actual human beings would read and grade. When I discovered the main essay topic, a flower of joy bloomed in my heart. In the week running up to the exam, I had allowed myself one petty, resentment-fueled hope: that I would be able to reference the hatefulness of standardized testing within the essay itself. And lo! My prayer was answered. I was invited — well, compelled actually — to riff on the idea that “one must choose between tradition and modernity.” While arguing that the apparent difference between tradition and modernity is a fundamental feature of modernity itself, and that supposedly “premodern” traditions often turn out to be of recent origin, I noted that many distinctions between traditional and modern practices were legitimate. One, for example, was the chasm that separated face-to-face, dialogic pedagogy depicted in traditional sources like Plato from the mechanized routinization of thought represented by the technologically mediated and institutionally required standardized test.

A frivolous jab I know, but I only had 45 minutes! I got a decent enough score for the essay, though short of the top. But I have been successfully writing and publishing on this very topic for so long that I cannot discount the possibility that I got slapped down a half point or two by whatever cogs of the higher education machine were being paid to read my essay. (Did they scowl? Smirk? Score!) Of course I wagered at the time that my petty and snot-nosed iconoclastic jab — so jejune, so If… — would dock my score, but such seemed the necessary symbolic gesture of the ritual that I forced out of the trial of the GRE: a pointless and corny self-sacrifice in the name of a god higher than the archons of bureaucratized thought.