Erik Davis, author of Techgnosis, Nomad Codes, [Led Zeppelin IV], and Visionary State, is a friend of HiLobrow. He is also a contributor: His 2010 “Pop Arcana” column for us on the Cute Cthulhu meme remains one of our most popular posts. We’re thrilled to publish ten of Davis’s essays which first appeared elsewhere; this is the third installment in the Nomadbrow series.

In 1959, Norman Holmes Pearson, a friend of the poet H.D.’s as well as her literary executor, asked Robert Duncan to write up something for the older author on the occasion of her birthday. Duncan, who considered H.D. (born Hilda Doolittle, 1886–1961) to be a spiritual and poetic initiatrix of sorts, agreed. Over the next five years, his tribute blossomed, or metastasized, into The H.D. Book, a hefty and digressive meditation on modernism, literature, and esoterica whose twenty-odd chapters appeared individually in a menagerie of mostly obscure literary journals. Given Duncan’s love of the serial form, it is perhaps appropriate that this sequence of pieces was never compiled during the poet’s lifetime. As such, The H.D. Book became something of a holy grail for serious Duncan readers — photocopies were gathered together and passed around, and a transcribed PDF of the collected pieces eventually made its way onto the Internet. 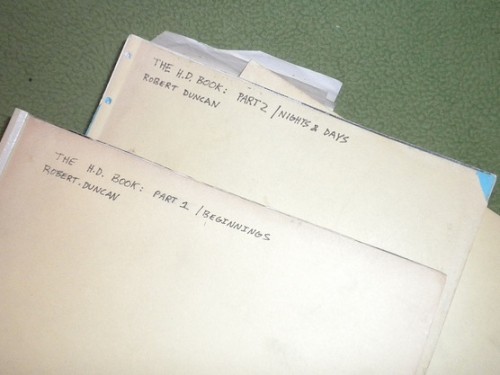 Duncan substantially revised The H.D. Book after its various chapters were published, and it is this version, clocking in at 696 pages, that the University of California Press has now released — the first installment in a projected six-volume collected writings (two collections of poetry and plays are slated to appear later this year). But The H.D. Book could never quite be definitive. As the editors, Michael Boughn and Victor Coleman (who were also responsible for the samizdat PDF), explain, the manuscripts are afflicted with what we might call today a lack of version control, and some of the writings never made it past the notebook phase. But that, too, is appropriate, as there is no “finalizing” Duncan. Like the unruly Hermes who sometimes ruled over his verse, Duncan was a bit of a puer aeternus, seeking transports and conjunctions and, for all his catastrophic undertows, refusing ultimate accounts.

That said, The H.D. Book is profoundly coherent: a strikingly original and provocative articulation of an American literary vision that is engaged simultaneously with Romantic enchantment, modernist formalism, and an arguably postmodern concern with citational networks, self-displacement, and the shadow play of a language always larger than us. The six chapters in book 1 are relatively conventional essays, and they root themselves in Duncan’s early life story, which was curious and deeply formative. Duncan’s adoptive family were members of a Theosophical splinter group, and he grew up in an atmosphere of veiled esoterica that, like the fairy tales his mother read him, permanently marked his imagination — Duncan’s account of his “Atlantis dream” in chapter 5 is as good a biographical avenue into his abiding occult concerns as you could hope to find. When he was still a boy, Duncan moved to Bakersfield, California, where his parents stopped consulting astrological charts and started keeping up with the Joneses. But Duncan remained hooked on the esoteric language of image. One day, a high school English teacher read H.D.’s limpid and arresting poem “Heat” out loud in class. The young Duncan was floored: He had discovered an inspired affinity, a kinship that would carry him through his discovery of his own poetic vocation a few years later at UC Berkeley.

In book 2, Duncan unravels the forms of memoir and the critical essay into the more elliptical and intimate arrangements of what he calls the “daybook.” Alternately brilliant, digressive, numinous, and cranky, these chapters resemble cognitive collages that reflect Duncan’s writing process, which involved scribbling notes and quotations onto scraps of paper that he arranged and copied into notebooks before typing them up and further revising. Many entries are no more than a paragraph or two, and some pack an almost Nietzschean punch, restless and incandescent. The dominant rhythm is recurrence, with the writing (and rewriting) forming a palimpsest that diagrams movements of soul as well as patterns of literary process. Chapter 8, dated “March 21, Tuesday, 1961,” begins with an early-morning fragment of dream that Duncan then tracks through a labyrinth that includes Baudelaire, the game of charades, Jehovah’s backside, the alchemy of Freudian analysis, shit and cunts, the play of verse/versus/version/aversion, and the marginalia of Jack Spicer.

Such is the pinball Wunderkammer of Duncan’s exotic and resonating mind — an associational intensity that in part explains his attraction to the occult, which is all about “universal sympathies, correspondences, communications.” The sixth daybook, for example, while ostensibly yet another discussion of Imagism and H.D.’s fiction, really becomes a kind of Calderesque mobile, gracefully organizing a set of recurrent concerns: sex, tantra, troubadours, manic depression, fairy tales, Blake, and Bruno Bettelheim’s popular account of Joey the “Mechanical Boy.” The chapter’s penultimate paragraph, which figures H.D.’s own storytelling as a weave, also reflects on Duncan’s own craft:

In the shuttle flying under the swift sense of the work, the “incident here and there” gathers so many instances from themselves into a moving significance, unfolding or discovering a design, that we see now the art was to set things into movement, was not only the weaving of a work of art but as if each knot that bound the whole into the quiet of a unity were also the pebble that dropped into that quiet as a pool broke up, was knot but also slipping-of-the-knot, to set up an activity thruout in the work of time and space within time and space.

Given this play of almost hallucinogenic associations, Boughn and Coleman are right to insist that The H.D. Book is not literary theory, whose rationalist agenda Duncan rejected. But it is nonetheless full of literary argument. Written during the nadir of H.D.’s reputation, Duncan’s text sets out to restore a poet unfairly thrust out of the anthologies, while also recovering the esoteric dimensions of modernism itself. Duncan’s account of Imagism, for example, not only invokes the literary traditions that inspired Pound and H.D. but opens the caverns of the imagination: Henry Corbin’s mundus imaginalis, crowded with the figures and phantasms that have long beguiled occultists, and without whom the latter-day angels of Rilke and Stevens and H.D. would be, literally, unimaginable.

Duncan’s rescue operation makes him particularly attuned to the exclusionary practices of boys’ clubs everywhere, whether in poetry or society at large. Way ahead of his time, Duncan pays close attention to authors like Mary Butts, Mina Loy, Marianne Moore, Laura Riding, Edith Sitwell, Gertrude Stein, and Virginia Woolf, showing how even the more celebrated women writers of the time were forced to work in the shadows. “Men live uneasily with or under the threat of genius in women,” he notes, articulating a truth that is perhaps most freshly glimpsed from the perspective of a gay man whose biography is full of inspiring women and whose poetry is marked by a tangled quest for a mother-muse. Duncan saw the boycott of women’s voices (and of the spirit of romance) continuing in his times, and he regularly takes swipes at various peers he perceived as masculinist — indeed, one of the most insistent leitmotifs of this text is Randall Jarrell’s galling characterization of H.D.’s later poetry as “silly.” And yet Duncan’s attention should not be mistaken for feminism or “solidarity”; if it is a politics, it is a politics of the imagination at once anarchist and visionary. 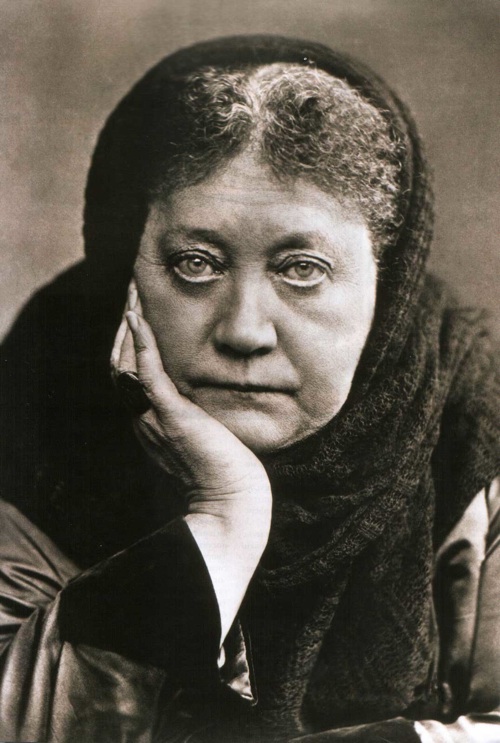 Duncan cautiously praises the much-mocked Madame Blavatsky, recognizing her enormous Theosophical books — declared to be revealed wisdom but actually “midden heaps” of quotations and unacknowledged borrowings — as textual collages avant la lettre: “From what has been disregarded or fallen into disregard, genres are mixed, exchanges are made, mutations begun from scraps.” This could, in part, describe The H.D. Book as well, a diffuse and heterogeneous matrix whose heaps of obscure references can, as with Blavatsky’s books, become tiresome and overwhelming. (The editors provide a helpful bibliography, though they wisely refused the understandable urge to add notes.) One can appreciate why Peter O’Leary, in his great Gnostic Contagion, accuses Duncan of hysteria, and why, in a recent study of occultism in modern poetry, the poet Devin Johnston reads Duncan’s refusal of closure as a symptom of intense narcissism. For all its brilliance, The H.D. Book can be an indulgent, manic, and repetitive text.

And a profoundly rewarding one as well, not just for its literary insights. The H.D. Book is as much a work of esoterica moderne as it is a literary essay; for those attuned to such currents, or seeking them, it veritably gleams. As Boughn and Coleman note in their introduction, the master word for this sprawling work is occult — literally, the “unseen.” Whether it’s Freud, or women poets, or sex magic, or dreams, Duncan is calling out the shadows. It’s incorrect to call Duncan a practicing magician or mystic, of course. “I do not believe,” he says, “for I am a poet: I imagine as I make it up.” That said, the occult is more than a source of poetic material for the writer — it’s a mode of poetic creation itself, another opening to those original presences, “gods,” let’s call them, who only later descend into poetic tropes and what the orders of language. Achieving a veridical “insistence of figure in an expanding ground of many relations,” Duncan’s enormous daybook crackles with a timeless and disarming wisdom, but in a timely manner appropriate to our era of samples, links, and networks — an era still unsure about how to read those uncanny figures that animate both visionary literature and the literature of vision.