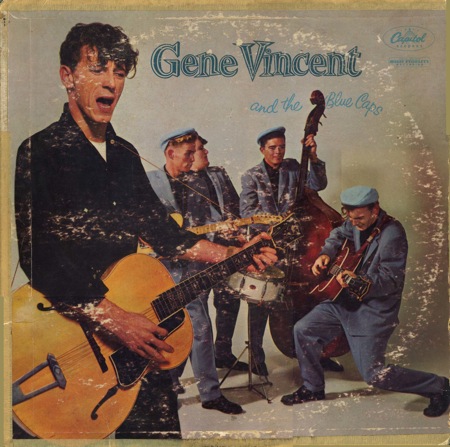 Elvis wanted to be your teddy bear and Eddie Cochran wanted to do some kissin’ in the balcony, but it was leather-clad GENE VINCENT (1935-1971) who knew a thing or two about what grown-up women want. Don’t get me wrong, I wouldn’t throw El or Eddie out of bed for eating crackers, but just listen to the panting hesitations in Vincent’s voice in “Be Bop-a-Lula” (1956), moments before drummer Dickie Harrell unleashes an orgasmic scream. Need more convincing? “I got a brand-new lover,” Vincent brazenly declares in the first line of “Baby Blue” (1958) as the song builds with slow intensity to yet another shaking climax. Or how about the lusty glee with which he delivers the line, “Go ahead and kill it baby/I’ve got another quart” in “Private Detective” (1964), the song itself a paean to alcohol-fueled illicit sex? I rest my case.

That he so fully delivered rock and roll eroticism is a testament to Vincent’s will, as well as his talent. His left leg was permanently damaged in a 1955 motorcycle accident (in a tragic coda, it was reinjured in the 1960 taxicab accident that killed Cochran). Doctors recommended amputation; instead Vincent wore a brace or a cast for the rest of his life. His mobility limited, Vincent at first relied on a pair of sexy “clapper boys” to flank him during performances, singing backup vocals and providing dance moves as Vincent fell to his knees. Later clips show Vincent, sans clapper boys, swinging his bad leg over the mike stand, a spiffy move for the fully fit — let alone a man in chronic pain.

On his or her birthday, HiLobrow irregularly pays tribute to one of our high-, low-, no-, or hilobrow heroes. Also born this date: H.R. and Leó Szilárd.